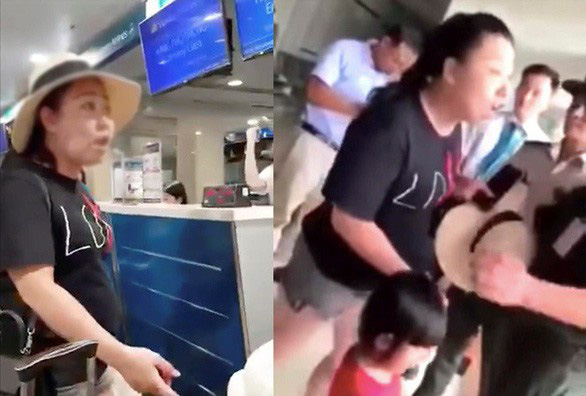 A female police officer from Hanoi, who was filmed yelling at an airline staff member and assaulting security officers at an airport in Ho Chi Minh City earlier this month, has been subjected to a year-long flight ban effective from Tuesday.

Le Thi Hien, 36, was about to take a Vietnam Airlines flight from Ho Chi Minh City to Hanoi on August 11 when she became involved in an altercation with an airport employee over luggage and boarding issues.

The female police captain, who works for the traffic police unit of Dong Da District in Hanoi, yelled and hurled insults at an airline employee on duty, and violently resisted security officers who interfered, according to mobile-phone footage of the incident seen by Tuoi Tre News.

Hien was traveling with a young girl who appeared to be her daughter, according to the videos.

After the onlookers-filmed footage went viral online, Hien was fined VND200,000 (US$8.6) by the police unit at Tan Son Nhat International Airport in the southern city, as her actions and words had “violated the code of conduct of police officers."

She was also suspended from work for 30 days after the incident, Dong Da police said on August 23.

The Civil Aviation Administration of Vietnam (CAAV) announced this week it has imposed a 12-month flight ban on the Hanoi woman, effective from August 27, 2019 until August 26, 2020.

Hien is also subject to another 12 months of compulsory visual supervision, between August 27, 2020 and August 26, 2021, whenever she travels by air after the ban, CAAV said.

Local airlines including national flag carrier Vietnam Airlines, Jetstar Pacific and Bamboo Airways have issued statements on denying Hien service and banning the policewoman from all of their flights during the said period.