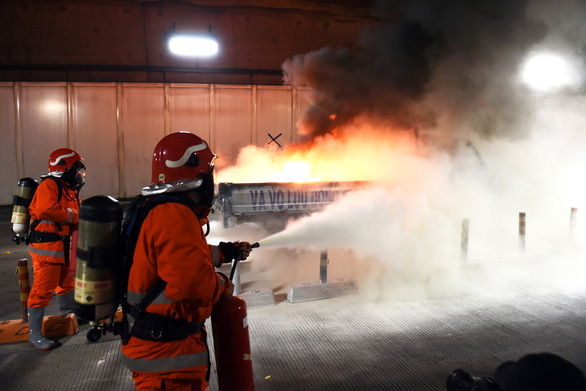 Read what is in the news today, October 28:

-- Vietnamese Vice State President Dang Thi Ngoc Thinh met with leaders of Venezuela, North Korea and the Pan-African Parliament on the sidelines of the 18th Non-Aligned Movement (NAM) Summit, which was held in Azerbaijan on October 25-26.

-- National Assembly discussions on Wednesday, Thursday and Friday this week will be broadcast live on television and radio as lawmakers are expected to debate socio-economic development plans and budget spending for the upcoming year.

-- Vietnam’s three hi-tech parks in Hanoi, Ho Chi Minh City and Da Nang have attracted around 250 projects and US$11 billion in total investment since their establishment, the Ministry of Science and Technology said in a report reviewing the parks’ performance.

-- A fire drill was held at the Saigon River Tunnel in Ho Chi Minh City on Sunday with the hypothetical situation being that a fire started from two trucks which had collided head-on while moving in opposite directions inside the underwater tunnel.

-- As more Vietnamese provinces and cities - including Ho Chi Minh City, Can Tho, Da Nang and Vinh Long - have unveiled costly plans to install thousands of new CCTV cameras to monitor public security and traffic, experts have warned that these plans would be a waste of money if not implemented correctly.

-- Phan Ngoc Tho, chairman of the People’s Committee of Thua Thien - Hue Province in central Vietnam, has vowed to “leave no one behind” as the province prepares for the historic relocation of thousands of residents out of the Citadel of Hue in the namesake city for conservation of the national relic and world heritage site.

-- Ho Chi Minh City is forecast to suffer from hide tides peaking at 1.7 meters on Tuesday this week, submerging parts of District 2, District 7, District 8 and Binh Thanh District while the northern region will see temperatures dropping to between 10 and 20 degrees Celsius due to a cold spell.

-- The investigative police unit of Vietnam’s Ministry of Public Security on Sunday launched criminal proceedings against Dinh Ngoc He, a former military colonel, and eight other defendants for “serious violations” in bidding and toll collection on the Ho Chi Minh City-Trung Luong Expressway in southern Vietnam.