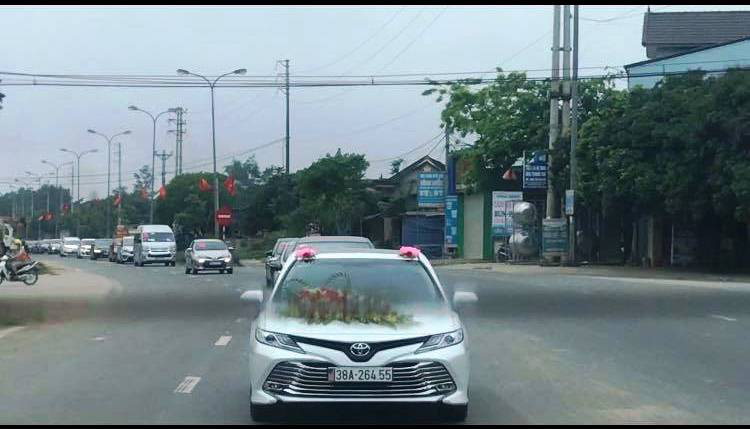 A hospital administrator has been suspended after organizing a motorcade for his son’s wedding ceremony amid Vietnam's government-mandated social distancing meant to prevent the transmission of the novel coronavirus disease (COVID-19).

The Ha Tinh People’s Committee in the eponymous province, located in the north-central region, on Thursday sent a document to the provincial Department of Health ordering the temporary suspension of Le Anh Hung, deputy director of Huong Khe General Hospital in Huong Khe District.

The health department was also asked to propose an appropriate penalty for Hung’s actions, which showed signs of violating regulations on COVID-19 prevention.

The incident took place on Tuesday when a motorcade comprised of about 20 vehicles participated in a traditional bride-fetching ritual organized to celebrate the wedding of Hung’s son.

According to local residents, Hung had rented several rooms at the Duc Tai Hotel for the bride and her relatives to stay before the ritual.

An official representing Gia Pho Commune reported that Hung’s family had sought permission for the event, stating that the ceremony would be brief.

Several medical workers were then tasked with monitoring the health of those who attended the wedding.

Hung told Tuoi Tre (Youth) newspaper that most of the people in the motorcade were his friends and his son’s.

The bride-fetching ritual ended and the motorcade left after reaching his house, he claimed.

The rest of the wedding ceremony took place at the residence and was only attended by family members of the bride and groom.

Vietnamese Prime Minister Nguyen Xuan Phuc on Tuesday issued a directive calling on the country’s residents to practice social distancing from April 1 to 15 by refraining from going outside unless absolutely necessary.

Public gatherings of more than two people during this period are also banned.

The premiere declared COVID-19 a nationwide pandemic on Wednesday.

Vietnam recorded its first case on January 23 and had discharged all of its first batch of 16 patients from the hospital by February 26.

The country has announced 217 new patients since March 6, when patient No. 17 was confirmed after it had gone three weeks without any infection.