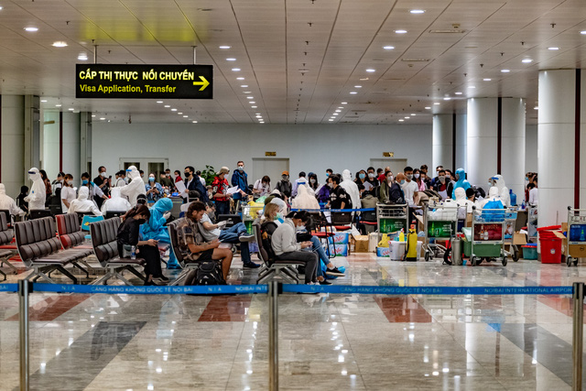 A Vietnamese woman has tested positive for COVID-19 after flying from Hanoi to Tokyo this week, according to Japan Airlines.

Passenger L.T.P.U. had a positive coronavirus test after she landed in Tokyo on Tuesday, the airline’s representative told managers of Noi Bai International Airport in Hanoi.

She had flown in seat 46G aboard flight JL752 from the Vietnamese capital to the Japanese capital.

Noi Bai airport managers have identified seven people, including four security guards and three ground service employees, who had contact with U.

Nguyen Khac Hien, director of the Hanoi Department of Health, told Tuoi Tre (Youth) newspaper that he had not been informed of passenger’s positive test.

Hien was not sure if she lives in Hanoi, he added.

“We have yet to find her address in Vietnam,” he said.

Five passengers arriving in Japan and South Korea from Noi Bai International Airport have tested positive for the virus since August 8, the airport’s managers said.

Four of the passengers live in Hai Phong, Ha Nam, and Hanoi, whose authorities quickly traced and quarantined their contacts after receiving notifications of their positive test results.

Vietnam has documented 1,034 COVID-19 patients, with 632 recoveries and 30 deaths as of Thursday afternoon.

Most of the dead victims had critical pre-existing conditions, including hypertension, chronic renal failure, heart failure, and even cancer.

Vietnam has confirmed 547 domestic infections since July 25, when Da Nang detected the first local case after the Southeast Asian country had gone 99 days without any community transmission.

Most of such local transmissions have been traced back to the beach city.