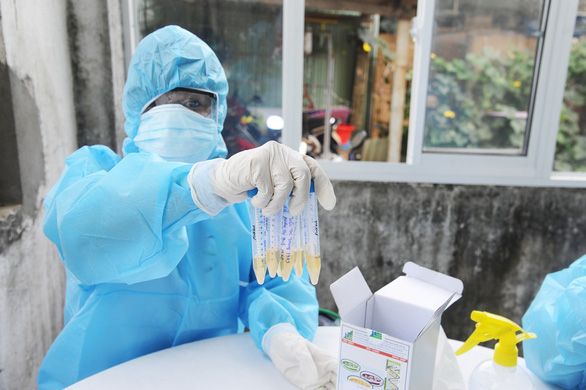 Two COVID-19 cases, including one local infection, detected in Vietnam

Vietnam’s Ministry of Health announced two COVID-19 cases, including one local, and 11 recoveries on Wednesday, with one fatality confirmed but not included in the death toll.

One of the new patients is 72 years old and comes from Hai Duong Province in northern Vietnam.

He exhibited symptoms of fever, headache, and fatigue on August 19.

He was admitted to a general hospital in Hai Duong where he was isolated and sampled for COVID-19 on August 30.

The Hai Duong Center for Disease Control and the National Institute of Hygiene and Epidemiology in Hanoi confirmed his positive tests on Tuesday.

He was then transferred to the Dong Anh branch of the National Hospital for Tropical Diseases in the capital, where he tested positive again on Wednesday.

The other case is a 30-year-old Vietnamese sailor who was isolated upon entry at a port in Khanh Hoa Province, located in south-central Vietnam, aboard a ship from Japan on August 30.

His sample was sent to the Pasteur Institute in Khanh Hoa’s Nha Trang City and came back positive on Wednesday.

He is currently isolated for treatment at a hospital for tropical diseases in Khanh Hoa.

Eleven coronavirus patients were pronounced free of the pathogen on Wednesday, all discharged from hospitals in Da Nang, a tourist destination on the central coast, according to the health ministry.

The ministry also reported that one COVID-19 patient had died on Tuesday night.

This fatality was not counted in the overall death toll as he had tested negative for the virus on August 30, August 31, and Tuesday morning, the health minitry said, adding that the 67-year-old patient in Da Nang had suffered pre-existing conditions, including chronic renal failure and hypertension.

Two other patients had also died after having tested negative for the pathogen at least three times, thus being excluded from the virus-related death toll.

Vietnam has documented 1,046 coronavirus cases, including 691 local infections, since January 23, when the pandemic first hit the country.

A total of 746 patients have beaten the virus while 34 have died, most having had serious comorbid medical problems.

Since the virus re-emerged in Da Nang on July 25, Vietnam has logged 551 local cases, most traced back to the beach city.

At the time of writing, Vietnam is quarantining 66,946 people who had close contact with infected patients or entered the country from pathogen-hit regions.