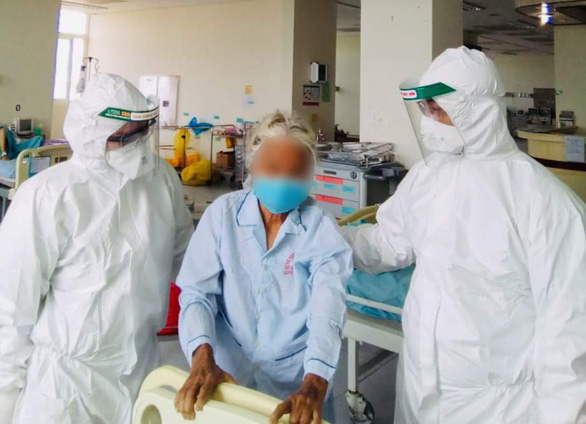 Vietnam announced five COVID-19 recoveries, including the country’s oldest patient who had retested positive several times during treatment, on Saturday as the last groups of backup medical workers left Da Nang after helping the previous epicenter contain the local outbreak.

The five recovered patients had been treated at the Quang Nam Central General Hospital in the namesake province, which borders Da Nang.

Among the five is a 100-year-old woman, L.T.H., hailing from Duy Trung Commune in Quang Nam’s Duy Xuyen District.

H. was hospitalized on August 1 with a diagnosis of severe pneumonia caused by the novel coronavirus, along with sepsis from the gastrointestinal tract, heart failure and complications of respiratory failure.

She is the oldest patient infected with COVID-19 in the Southeast Asian country to date. She retested positive multiple times during her treatment.

Thanks to the doctors’ effort, her condition improved and she had tested negative for the coronavirus for four consecutive times before being declared free of the virus.

She was in good health and able to walk at the time of the hospital discharge.

Quang Nam Province has treated 96 COVID-19 patients, with 82 having recovered and been discharged, according to the provincial Department of Health’s deputy director Mai Van Muoi.

The 14 under-treatment patients include 13 at the Quang Nam Central General Hospital and one at the provincial general hospital.

On Saturday morning, the last groups of backup medical workers from the northern city of Hai Phong, Ho Chi Minh City and the north-central province of Nghe An left Da Nang as the beach city has managed to control the local outbreak of COVID-19 after over a month of fighting.

“Your support brought us hope to stand our ground in this battlefield and repel the epidemic over the past month and a half, gave us more confidence that Da Nang is not alone in this fight, and gave us motivation and optimism to fight the epidemic,” the municipal chairman Huynh Duc Tho told the medical teams at a farewell ceremony on Saturday morning.

A total of 551 local cases, mostly linked to Da Nang, have been registered in Vietnam since July 25, when the beach city reported the first domestic transmission after the nation had gone 99 days without any community-based infection.

It has been 15 days since the central city last recorded a locally-transmitted COVID-19 case.

Currently, only 29 cases of COVID-19 are still being treated in Da Nang.

The tourist city has gradually relaxed social distancing rules in place since July 25 to curb the spread of COVID-19.

Vietnam has documented 1,060 COVID-19 cases, with 902 having recovered and 35 virus-related fatalities as of Saturday afternoon, according to Ministry of Health statistics.