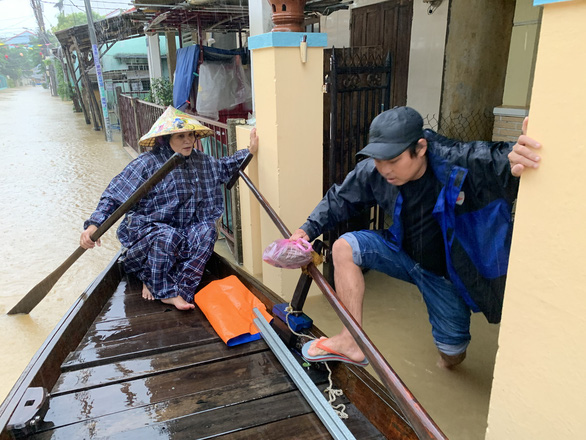 Suffering torrential rains and water discharges from upstream hydropower reservoirs, many streets in downtown Hoi An City in the central province Quang Nam have been severely submerged, prompting local authorities to plan an evacuation to prevent human loss.

As floodwater is projected to reach the warning level three on Vietnam’s natural disaster scale, residents and authorities of Hoi An have prepared measures to tackle the historic inundation.

According to a recent notice, several hydropower plants in the central region will start discharging water from their reservoirs at a flow rate from 200 to 2,000 cubic meters per second, starting 7:00 pm Monday.

Districts of Quang Nam next to the Thu Bon River, including Duy Xuyen, Dien Ban, Dai Loc, and Hoi An Ancient Town, would be inundated further.

In the ancient town, floodwater neared the warning level three on Saturday night and was poised for a rapid rise on Sunday afternoon.

Given water levels recorded by 6:00 pm Sunday afternoon, floodwater would exceed the flood warning level three by four centimeters within that night, said Nguyen The Hung, vice-chairman of the Hoi An City People’s Committee on Sunday.

As witnessed by a Tuoi Tre (Youth) newspaper correspondent Sunday afternoon, the area had been submerged in floodwater over the past few days, with Minh An Ward, the public square near the Hoai River, and the southern bank of the Thu Bon River being the hardest hit.

Residents of these areas have been stranded for a few days, while their necessities and supplies have been moved to the mezzanine.

All their daily routines have turned upside down.

In the worst-case scenario similar to that happened in 2017, families in low-lying areas of Hoi An will have to load their belongings onto a boat tied to their verandas and evacuate to safer places.

Residents and authorities of Hoi An are cautiously watching flooding developments to respond to possible heavy consequences.

Below are photos captured in Hoi An around 5:00 pm on Sunday.