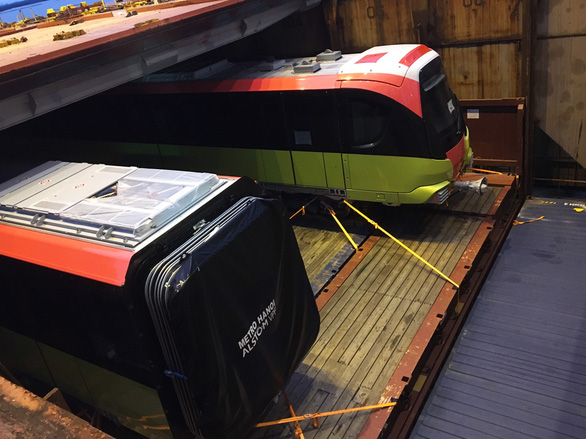 The first carriages of the train to run on Hanoi’s third metro route were unloaded to Nam Hai Dinh Vu Port in northern Hai Phong city on Sunday.

The metro train departed from France’s Port of Dunkirk on September 2 and was due to arrive in Vietnam in October 24.

As the shipment went one week faster than expected, the train reached Vietnam on 1:30 am Sunday. It was discharged from the sea vessel at 8:00 am the same day.

As per schedule, the carriages will be sent to Nhon Depot in Hanoi on a special vehicle for oversized and overweight cargo, and be then installed on the metro rail on line 3 in preparation for test runs.

A total of 10 trains are intended to operate on Hanoi’s metro line 3, which uses a standard track gauge of 1,435 millimeters. These trains are designed and assembled in adherence to European quality standards by French manufacturer Alstom.

The trains’ exterior is made of lightweight aluminum alloy with a green, red, and white coating and a symbol of Khue Van Cac – the iconic structure of Hanoi’s Van Mieu (Temple of Literature) – on the front.

It is fully equipped with air conditioner and ventilation systems, loudspeakers for announcements, surveillance cameras, standalone smoke and fire detectors, and LED lighting with auto-adjust brightness, among others.

The interior of the trains will be themed in light tones with white LED lighting to provide the most comfortable experience for passengers.

Each train consists of four carriages with total passenger capacity between 944 and 1124 per trip.

Nguyen Cao Minh, head of the Hanoi Metropolitan Railway Management Board, said Hanoi's metro line 3, which connects Nhon Depot and Hanoi Railway Station, will commence commercial operations in a 8.5-kilometer length from Nhon to the University of Transport and Communications in the latter half of 2021, while the remaining four kilometers will be brought into service in late 2022.