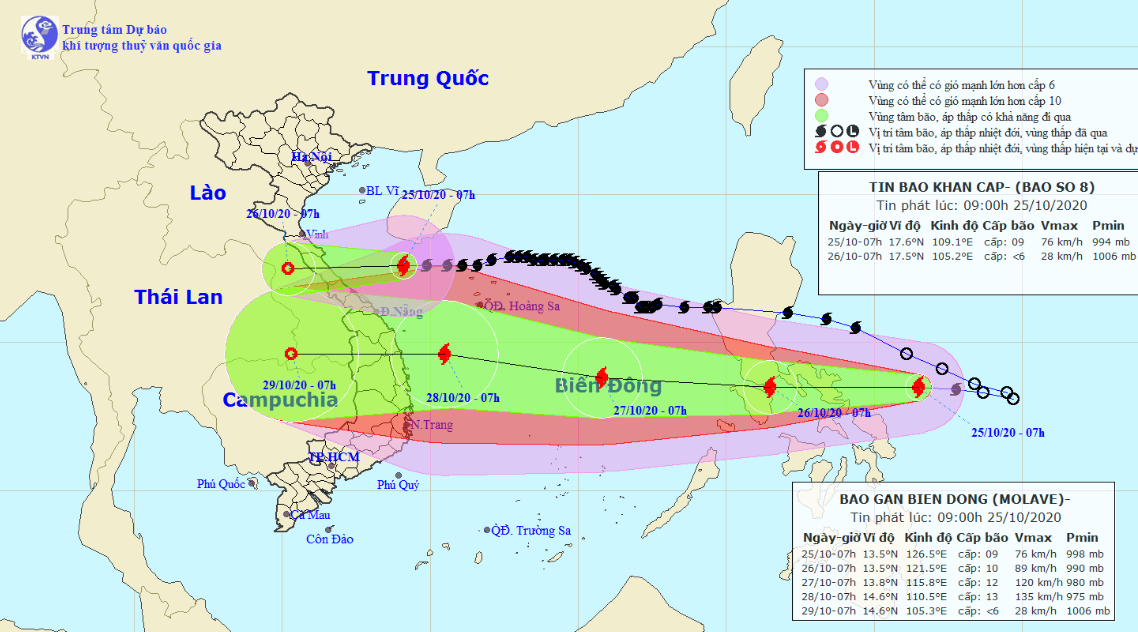 Tropical Storm Saudel, Vietnam’s eighth in 2020, is closing in on the country's north-central region and is forecast to be downgraded after making landfall, while another storm, Molave, is on its way to the East Vietnam Sea.

Saudel was located 260km east of the mainland between north-central Ha Tinh and Quang Tri Provinces as of 7:00 am on Sunday, unleashing winds at 60-90km per hour and gusts at up to 117km an hour, according to the National Center for Hydro-meteorological Forecasting.

The storm will travel westward in the next 24 hours and make landfall in north-central provinces, before weakening into a tropical depression, with winds at below 40km per hour.

Rainfall at 50-150 millimeters is expected to dampen the localities between north-central Nghe An and Thua Thien-Hue Provinces on October 25 and 26 due to the influence of the storm.

After entering the East Vietnam Sea, Molave will become Vietnam’s storm No. 9 this year and the fourth to hit the country within October.

By 7:00 am on Tuesday, it will have been 300km northeast of Song Tu Tay Island in Vietnam's Truong Sa (Spratly) archipelago, with wind speed at 100-135km per hour and gusts reaching 166km an hour.

Molave will have been 170km east of the mainland from central Da Nang City to south-central Phu Yen Province, by Wednesday morning.

Wind speed will then increase to between 115 and 150km per hour.