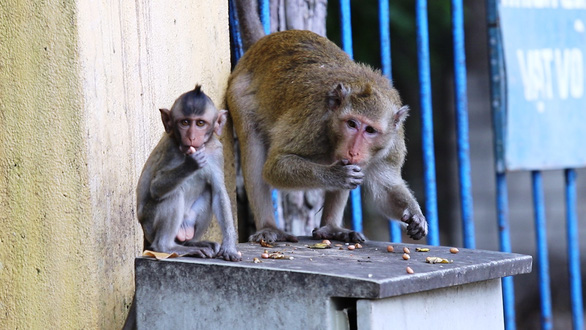 A troop of monkeys is reported to have recurrently ransacked schools and residential areas in a southern Vietnamese province, while also being aggressive to people.

The tribe of apes dwells in the woods surrounding the Caodaist Holy See in Tay Ninh Province.

Multile reports have been made by parents of students attending 19/5 Kindergarten, which is located near the Caodaist Holy See, of the frequent attacks of the monkeys looking for food.

People in the locale, most notably the students, have been injured in such raids.

On September 23, the rampaging monkeys bit the school guard Nguyen Tan Nghia in his hands, stomach, and legs while he was trying to drive them away.

From September 25 to October 8, the troop of primates stormed the school three more times, in one of which they broke into the classroom and injured a student.

According to Nguyen Trung Thien Hai, an affected resident in Long Hoa Ward of Tay Ninh Province, the monkeys would show up in groups of dozens in the early morning to disturb the neighborhood.

Exterior items and foodstuffs displayed on the outdoor altar would be ransacked after each raid, he added.

The locals have attempted to shoo these intruders away with tree branches, but that only provokes them to cause further damage.

Households near the Caodaist Church now have to shut their doors tight to prevent monkeys from breaking in.

“We have reported to local authorities as well as the Church of Tay Ninh Caodaism multiple times, but a comprehensive solution has yet to be in sight," Hai said.

"Local households are mulling over dispatching these animals if they turn exceedingly hostile to their families."

Mang Van Thoi, head of Tay Ninh’s Forest Protection Department, told Tuoi Tre (Youth) newspaper on Saturday that the agency has had a plan to resettle two-thirds of the monkey population in the vicinity of the Caodaist Holy See in their natural habitat in the near future.

The monkey populace in the woodland near the church is growing, rounded up to 150 individuals at the moment, according to the Forest Protection Department.

As their territory becomes denser, these monkeys are driven to throng residential areas to look for food.

On the other hand, the majority of hostile monkeys in the locale originated as pets caged in households before being released to the natural environment.

Coupled with the fact that they were shunned out by feral monkey troops, these primates have gradually turned more aggressive and exhibited violent behaviors.