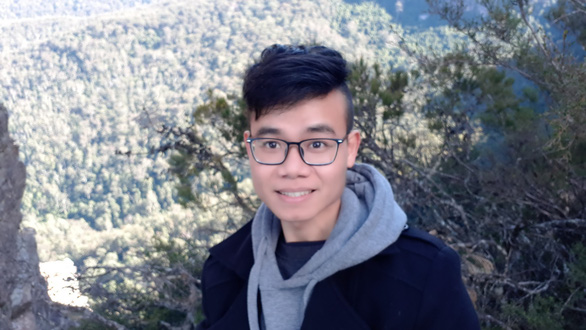 Nguyen Minh Hieu was in disbelief when he found out he had won a VND900 million ($39,000) scholarship to RMIT University in Vietnam, a sweet payoff after years of craving access to higher education.

Hieu was born into a low-income family in the southern Vietnamese countryside. After losing his father in a tragic explosion at a young age, his journey to education has always been at risk of being cut short.

“We wound up losing our home and my mom and I had to move into an abandoned temple. We stayed there for nearly 20 years,” Hieu said.

Though still just a child, Hieu did his best to help relieve his mother’s financial burden.

“When I was in seventh grade, I begged my mum to let me drop out of school so she could save money on tuition, but she refused,” Hieu shared.

Six years later, after graduating from high school with no money to attend university, Hieu took up a job as a delivery driver.

“I began working for a bakery. I had to wake up at 4:00 am each morning to deliver cakes and bread. My shift lasted until very late at night.”

Hieu had almost given up all hope of a higher education when he found KOTO – a social enterprise with a mission to empower at-risk and disadvantaged youths in Vietnam through its internationally recognized hospitality training program.

“I felt like my chances of getting into KOTO’s program were pretty low, but I still decided to give it a shot,” Hieu shared.

In the end, Hieu’s steadfast commitment to education won over the KOTO representatives at his interview and he was admitted into the program.

All of his hard work, gratitude and dedication paid off when Hieu received a scholarship awarded in 2018 by KOTO in partnership with TAFE NSW in Australia to study for an Advanced Diploma in Hospitality Management.

“Hieu is one of the most dedicated students I have witnessed in over 20 years of teaching,” said Karen Law, a professor at TAFE NSW.

“He has true respect for the opportunity he’s been given and a clear goal of assisting other young people who came from very difficult backgrounds and want to achieve something.”

Hieu’s determination and thirst for knowledge have also made a strong impression on Huong Dang, Hieu’s mentor and the founder and CEO of the social enterprise HopeBox.

“I have witnessed Hieu achieving many milestones as he’s grown from a young boy with low-self-esteem to a completely transformed young man who is confident and has a heart full of hope,” Dang said.

This year, after passing a rigorous selection process, Hieu was accepted into the RMIT Vietnam 2020 Scholarship program at the age of 28.

“My biggest goal is to create a bigger impact in society and give people the chance to lend a helping hand.  Together we can build a stronger community and continue to support disadvantaged youths in Vietnam,” Hieu said.