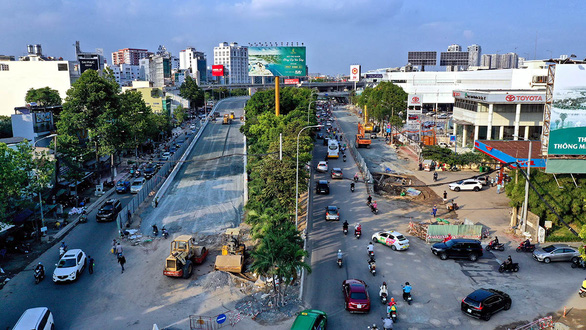 While many inundation mitigation projects in Ho Chi Minh City are being completed in haste to wrap up before the rainy season arrives, several others are not seeing a solid completion date.

As reported by the Southern Regional Hydrometeorological Center, the rainy season in Ho Chi Minh City and other southern provinces will commence in late April or early May.

Last year, the city reported 15 unresolved inundation flashpoints, which gives local residents reasons to be worried about this year’s situation.

As seen by correspondents of Tuoi Tre (Youth) newspaper on Wednesday, workers of the renovation project on Nguyen Huu Canh Street in Binh Thanh District were making haste to meet the completion deadline.

The construction site on the section from Dien Bien Phu Street to Thu Thiem Bridge was receiving ground filling, while the sidewalk was seeing new tiles installed.

Among these projects is the renovation of Nguyen Huu Canh Street, a chronic flashpoint of flooding in the city.

Spreading over a length of 3.2 kilometers in District 1 and Binh Thanh District, the renovation is expected to mitigate inundation and relieve the daily struggle of commuters on the street during the rainy season.

“Our units are working day and night to get the project done in time before the rainy season,” Phuc said.

According to the official, the sewage system upgrade and roadway renovation for Huynh Tan Phat Street, more specifically the section from Phu Xuan Bridge to Binh Khanh Ferry Terminal in Nha Be District, has also been completed.

Meanwhile, the flooding mitigation project on Nguyen Van Huong Street in Thao Dien Ward of Thu Duc City is facing a setback in a site clearance deal with one household, which is anticipated to be resolved within this year.

Furthermore, the renovation and upgrade of Nuoc Den Canal in Binh Tan District, as well as the second phase of the Ho Chi Minh City Water Environment Improvement Project, will enhance the flow of streams in the city, while ameliorating quality of the canal bank to address flooding and pollution issues in the area.

“We are working with functional agencies, ward- and district-level authorities to complete the projects,” Phuc stated.

“These projects do not simply enhance the city’s response during the rainy season, but also complete the traffic network.”

Not all flood control efforts in Ho Chi Minh City are reaching their final laps.

According to an officer of the Ho Chi Minh City Department of Construction, the city reported 15 inundation flashpoints in 2020, each of which was associated with a flood control project invested by the Urban Infrastructure Construction Investment Project Management Authority of Ho Chi Minh City.

The implementation progress of each project varies, based on realistic conditions of each area.

“On top of infrastructure solutions, we are rolling out other efforts, including dredging the flow to minimize flooding,” the official said.

As revealed by this official, the urban infrastructure authority mulled eight projects to eliminate 11 inundation hotspots in 2020 and 2021, but most of these are behind schedule.

The renovation of sewage systems on Tan Quy Street in Tan Phu District has yet to be kick-started, while construction was initially slated to start in the third quarter of 2020.

Similarly, the sewage system upgrade for Truong Cong Dinh Street and drainage system renovation for surrounding areas, which were expected to start last year, have yet to see any new progress.

According to the urban infrastructure authority, the three mentioned projects have found their contractors, but by now the implementation deadline has expired.

The agency is working with the municipal Department of Construction and relevant agencies to adjust the construction time frame to commence the fieldwork within this year.

The remaining five projects, which address inundation issues on Le Duc Tho, Bach Dang, Pham Van Chieu, Quang Trung, Dang Thi Ranh, Duong Van Cam, and Kha Van Can Streets, are put on pending until their funding in the 2021 budget plan is approved by the municipal People’s Committee.

The city has also touched on the severe inundation circumstance on Vo Van Ngan Street in Thu Duc City with a new sewer system upgrade project worth VND129.4 billion ($5.6 million), which has launched construction in October 2020 and is expected to wrap up in 17 months.

Currently, the project is on hold due to legal and paperwork issues, and is slated to resume on April 22.