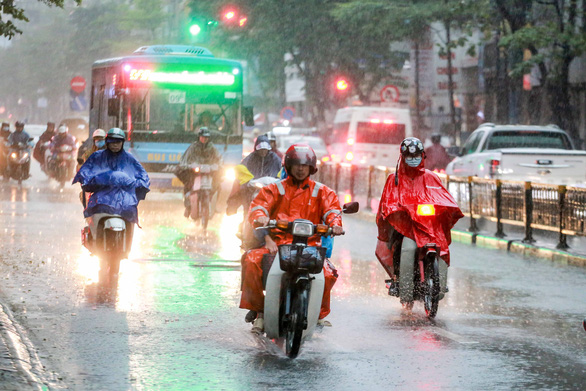 Heavy rains, with rainfall of up to 120mm, to hit northern Vietnam

It is forecast that northern and north-central Vietnam will see moderate to heavy rains, even downpours, on Monday, the National Center for Hydrometeorological Forecasting reported.

Due to the impacts of a cold air mass, showers and thunderstorms have occurred in these areas since early this morning, with rather high rainfall measured at some locations, such as 43 millimeters in Bac Quang District, Ha Giang Province and 42 millimeters in Do Luong District, Nghe An Province.

It is forecast that moderate to heavy rains will hit northeastern and north-central provinces, with precipitation ranging from 40 to 100 millimeters over the next 24 hours, even up to 120 millimeters in some places.

Northwestern provinces will have showers and thunderstorms in general, but moderate to heavy rains may strike some localities on Monday.

During the thunderstorms, lightning, whirlwinds, and hail are likely to happen.

Sweeping floods, landslides, and inundation may occur in mountainous provinces, the center warned.

In northeastern localities, it will turn cool in general on Monday, except for mountainous areas where it may be cold.

In Hanoi, early this morning, there were showers and thunderstorms accompanied by lightning.

It is forecast that moderate to heavy rains together with thunderstorms will take place in the capital city on Monday. During the thunderstorm rains, there may be strong gusts, hail, and lightning.

From Monday until April 30, the Central Highlands and southern regions will see sunlight during daytime and thunderstorm rains in some localities in the evening and night-time, said the center.

Whirlwinds, lightning, and strong winds may occur during the thunderstorms.