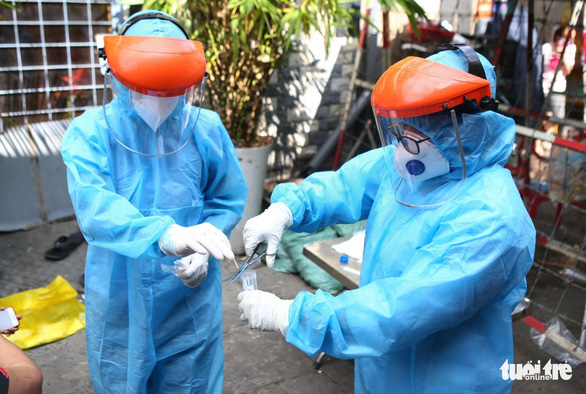 Fourteen of the city’s latest cases were detected after a fourth test, as they had already tested negative for the virus three times.

They were traced back to Revival Ekklesia Mission, a Christian congregation in Go Vap District, the ministry said in a report.

Hundreds of patients have been linked to this religious group since last month, according to the Ho Chi Minh City Center for Disease Control (HCDC).

Most of the city’s new infections were direct contacts of infected patients and found in isolated areas.

City health authorities have been tightening their grip on identified infection chains, the HCDC said, adding that the virus may have still spread in the community.

New clusters were mostly detected at residences or workplaces, the center noted.

Everyone is strongly advised to follow social distancing guidelines, having been implemented for nearly three weeks, and abide by health declaration regulations to help stall transmission, it warned.

Ho Chi Minh City has registered 1,135 domestic COVID-19 cases since April 27, when the fourth wave of transmissions broke out in Vietnam, according to the HCDC’s statistics.

The national government on Thursday distributed to the city about 800,000 of nearly one million AstraZeneca vaccine doses it had received from Japan on Wednesday night.

City authorities expect to use up the shots within one week given the increasing spread, as the HCDC has recorded over 80 cases daily since last weekend.

The additional jabs will be administered to priority groups, including medical and factory workers.

So far, the city has given the first AstraZeneca shot to 64,366 medical staff and other frontline workers, according to the municipal Department of Health.

A total of 10,179 people have been fully vaccinated against COVID-19,.

The southern metropolis has about 7.2 million people aged 18 or above, the target of its inoculation drive, the department said.

The Southeast Asian nation has recorded 8,781 locally-transmitted infections in 40 of its 63 provinces and cities in this fourth wave.