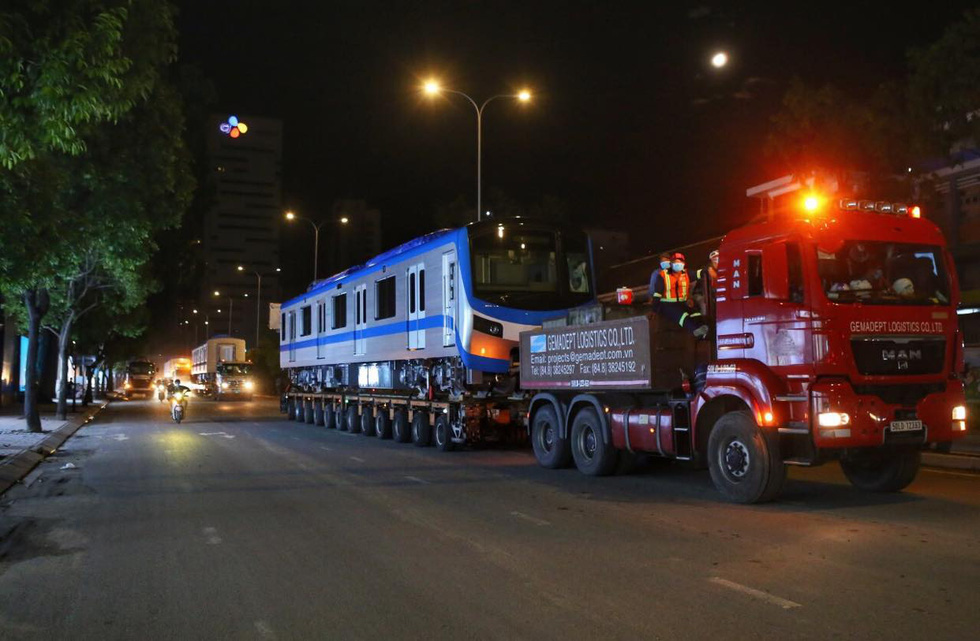 The fourth train for Ho Chi Minh City’s metro line No. 1 was transported to the Long Binh Depot, the route’s technical and service station in Thu Duc City, at 0:00 am on Monday after arriving from Japan at noon on Sunday.

The train was carried by three longer and heavier vehicles from Khanh Hoi Port in District 4, along Ton Duc Thang, Nguyen Huu Canh, and Mai Chi Tho Streets and Hanoi Highways, before reaching the Long Binh Depot.

It was among two Japanese-made metro trains with six carriages received at the port on Sunday.

After the trains, the fourth and the fifth that have been shipped to Ho Chi Minh City so far, are both transported to the Long Binh Depot, they are expected to be installed on the T1 track at the depot on Monday and Wednesday for trial operations.

Previously, three other trains of the same type had arrived at the depot.

The metro No. 1 project, also known as the Ben Thanh - Suoi Tien route, runs from Ben Thanh Market in District 1 to the Long Binh Depot in Thu Duc City and is 19.7km long, including a 2.6km underground section and a 17.1km elevated railway.

Construction started in August 2012, and about 85.9 percent of the work has been finished.

The metro line has a total of 17 trains, which consist of 51 carriages in total.

The maximum speed is 110 kilometers per hour along the elevated section and 80 kilometers an hour underground.

The project costs more than VND43.7 trillion (US$1.9 billion), most of which has come from Japan's official development assistance (ODA).