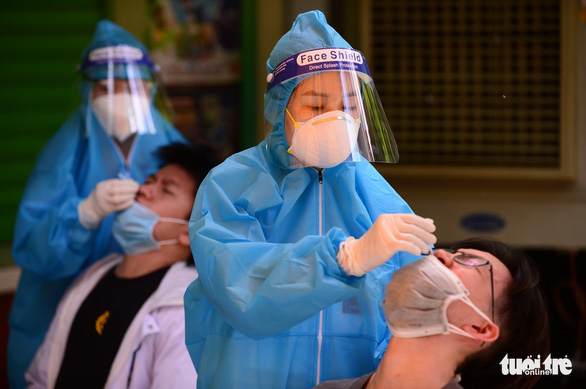 The Vietnamese Ministry of Health late on Wednesday morning announced the deaths of five more COVID-19 patients, including four in Ho Chi Minh City who had had no underlying health conditions, raising the toll to over 100 fatalities.

One of the deceased was a 67-year-old woman hailing from northern Bac Giang Province with a history of hypertension for many years and diabetes for one year.

She tested positive for the novel coronavirus on June 3 and was sent to the Bac Giang Hospital for Lung Diseases for treatment.

Her condition did not improve, as she was placed on extracorporeal membrane oxygenation (ECMO) and suffered renal failure and anuria.

The patient was transferred to the National Hospital for Tropical Diseases in Hanoi, where she was diagnosed with septic shock, septicemia, acute respiratory distress syndrome (ARDS) caused by pneumonia due to COVID-19, kidney failure with the background of diabetes and hypertension on June 13.

She died on Monday.

The four deaths in Ho Chi Minh City came from Nha Be District and Cu Chi District, District 1, and District 4.

None of them had records of pre-existing medical conditions.

The 63-year-old female patient in Cu Chi District and the 56-year-old male patient in District 4 had their COVID-19 tests return positive on June 24 and were also admitted to Pham Ngoc Thach Hospital.

The woman died on July 1 because of severe pneumonia caused by COVID-19 and complications of acute respiratory failure.

The man was confirmed dead on June 29 due to the same reasons as the woman, in addition to septic shock, multiple-organ failure, and acute coronary syndrome.

The five new deaths have taken the toll in Vietnam since the beginning of the pandemic in January 2020 to 102 people, including 77 from April 27 to date.

Most of the fatalities were in older patients with underlying diseases.

The Ministry of Health on Wednesday morning confirmed 277 new cases of COVID-19, including one imported case and 270 local infections in Ho Chi Minh City.

In the new infection round which began on April 27, Vietnam has documented 18,889 local cases across 55 out of its 63 provinces and cities.