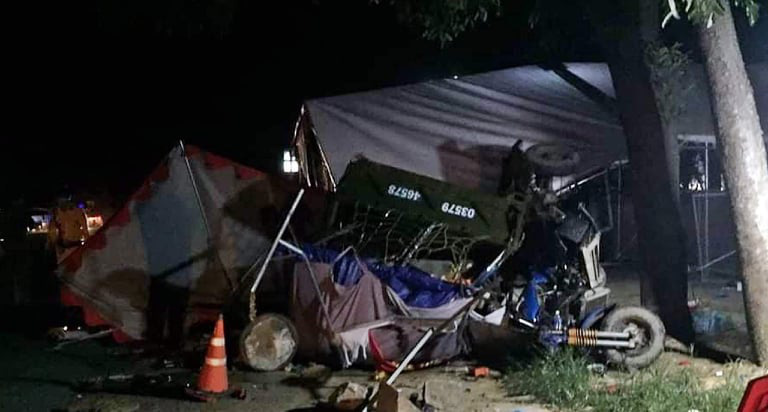 A 15-year-old boy was killed while his four family members were seriously injured after they were hit by a truck while traveling home from Ho Chi Minh City on a three-wheeled motorbike.

The accident occurred along a section of National Highway 1A in the south-central province of Binh Thuan at around 11:00 pm on Saturday, according to officers.

A three-wheeled motorbike was pulling over to a COVID-19 checkpoint on the side of the road for heath declaration when it was rear-ended by a truck.

There were five people on the three-wheeler, including a married couple and their three children.

The crash killed the 15-year-old son on the spot, while the other four family members were severely injured and rushed to the hospital.

The force of the collision also caused the three-wheeled motorbike to crash into the checkpoint, injuring two on-duty officers.

One of the officers was admitted to the hospital for emergency treatment due to his serious wounds.

Police said the five family members had just left Ho Chi Minh City and were heading to their hometown in north-central Nghe An Province due to the COVID-19 pandemic.

The truck driver was required to undergo rapid COVID-19 testing, and his result came back positive.

Ho Chi Minh City is currently the biggest COVID-19 epicenter in Vietnam, having recorded 92,270 local cases since the fourth wave began on April 27.

Municipal authorities have implemented social distancing at various levels since May 31 and repeatedly tightened pandemic response measures to struggle with the worst-ever outbreak.

A lot of people have been fleeing the city for their hometowns over the past weeks after their livelihoods were affected by the pandemic.