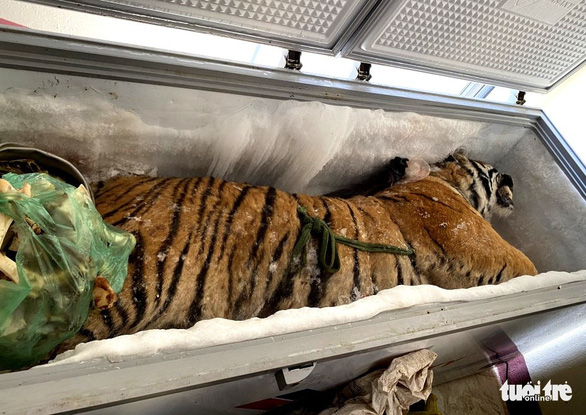 Police in Ha Tinh Province, Vietnam are investigating a man after discovering the body of a dead tiger and unidentified animal bones in a freezer at his house.

Police officers on Saturday said they had seized a tiger carcass weighing 160 kilograms and 34 kilograms of unknown animal bones stored in a freezer at the residence of Nguyen Van Chung in Huong Son District two days before.

A criminal investigation has been launched to clarify Chung’s “violation of regulations on the protection of endangered, precious, and rare wildlife species,” police said.

Chung, 42, told investigators that in December 2020 he met a man named Viet, a truck driver, at local eatery and then invited him home.

Viet asked Chung to keep for him a freezer containing animal carcasses that would be processed into bone glue.

The driver promised to pay him some amount after the glue was sold.

Ten days later, Viet carried a freezer to Chung’s house. Chung initially refused it upon finding a tiger carcass and animal bones inside, but he eventually to agree to Viet’s request.

Viet gave Chung VND9 million (US$395) to pay for the electricity cost for the freezer’s operation.

Also in August, two men were arrested after being caught transporting seven live tiger cubs for sale in Nghe An.