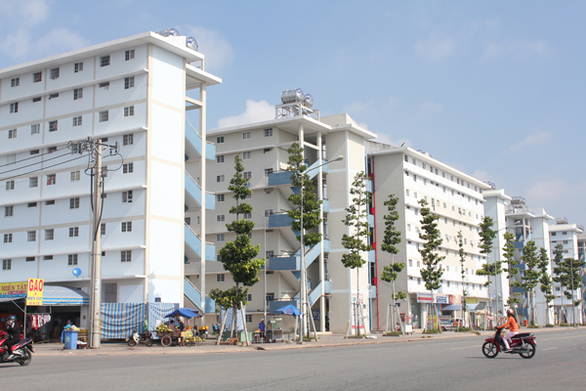 Binh Duong Province in southern Vietnam has asked the central government for a loan of VND10 trillion (US$445 million) to build one million affordable houses for workers and social policy beneficiaries, a number deemed by an expert as too excessive.

The provincial authorities plan to use the expected loan and other raised funds to finance a housing plan under which some projects will be developed to offer around one million accommodations in coming years.

This housing plan is among the proposals included in the province’s report to the prime minister and relevant agencies on the local economic recovery in the wake of the COVID-19 pandemic.

Small rented quarters crowded with workers, mainly internal migrants, in populous residential areas are one of the factors contributing to the recent rapid and hard-to-control COVID-19 outbreaks in the province, local authorities said in the plan.

The province thus wants to provide workers as well as social policy subjects with better accommodations to improve their life quality as well as the efficiency of epidemic prevention efforts in the future.

A real estate expert told Tuoi Tre (Youth) newspaper that Binh Duong’s housing plan is unreasonable as it aims to build as many as one million social houses while the province now has a population of just 2.6 million people, more than half being internal migrants.

Such a large number of houses, if made available, will be very redundant, the expert claimed, pointing out that even a large city like Ho Chi Minh City, with a population of about 10 million people, now has just over two million affordable houses in total.

The expert added that Indonesia, with a population of over 277 million, developed a program for one million affordable houses in 2017, but the program was deployed in 10 major cities, each of which had only about 100,000 houses built.

Deputy Minister of Construction Bui Hong Minh said that Binh Duong can use its local budget to construct state-owned affordable houses to accommodate eligible people under lease, purchase or lease-purchase agreements in compliance with current regulations.

Regarding the province seeking a VND10 trillion loan from the central government for its housing projects, Deputy Minister Minh said this issue will be subject to opinions from the Ministry of Finance and the Ministry of Planning and Investment.

Binh Duong, with an area of nearly 2,700 square kilometers, is one of the industrial park hubs in the southern part of Vietnam, along with Ho Chi Minh City and Dong Nai Province, and is home to a large number of internal migrant workers who represent most of the province’s workforce.

By the end of the second quarter of this year, the province had housed a total of 50,000 enterprises with more than 1.2 million employees hailing from across the country, according to the provincial Department of Labor, War Invalids, and Social Affairs.

Binh Duong now has 29 industrial parks with over 2,000 enterprises which employed some 486,000 Vietnamese workers and 14,900 foreign workers in the quarter.

The province also has 12 industrial clusters with around 40,000 employees, the department said.