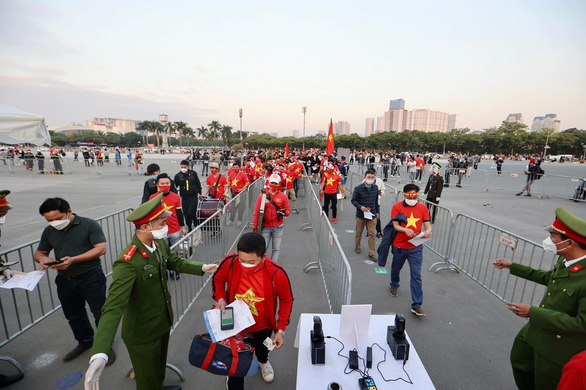 A man who attended the FIFA World Cup qualifier between Vietnam and Japan at My Dinh National Stadium in Hanoi last week has contracted COVID-19 despite testing negative for the coronavirus before entering the venue.

The new infection was among 258 cases detected in 25 out of 30 districts and towns across Hanoi on Wednesday.

The patient, a 30-year-old resident of Son Tay Town, came to My Dinh Stadium in Nam Tu Liem District to watch the Vietnam - Japan match in the final 2022 FIFA World Cup qualification round on the evening of November 11, in which the hosts lost 0-1 to the visitors.

The man had had his COVID-19 test result return negative for the virus before entering the stadium, which accommodated more than 11,000 spectators, or 30 percent of its capacity, that night.

He was found to be carrying the pathogen through a mass screening session later and was officially logged into the daily infection record announced by the Hanoi Department of Health on Wednesday.

Hanoi has documented more than 6,800 local COVID-19 cases since the fourth outbreak hit Vietnam on April 27.

The Vietnamese capital has seen a surge in community-based infections over the past days.

Over 99 percent of the city’s adult population have received at least one dose of COVID-19 vaccine while nearly 85 percent have been fully vaccinated, according to the national COVID-19 vaccination portal.

Vietnam has detected 1,055,246 COVID-19 infections since the pandemic first hit the country early last year, including a total of 1,050,185 community transmissions in its 63 provinces and cities since the fourth virus wave broke out.

More than 36.8 million people of the country’s 98-million population have been fully inoculated against the coronavirus.

The central government has relaxed pandemic control curbs over the past few weeks as transmissions have slowed down, partly due to larger vaccine coverage.