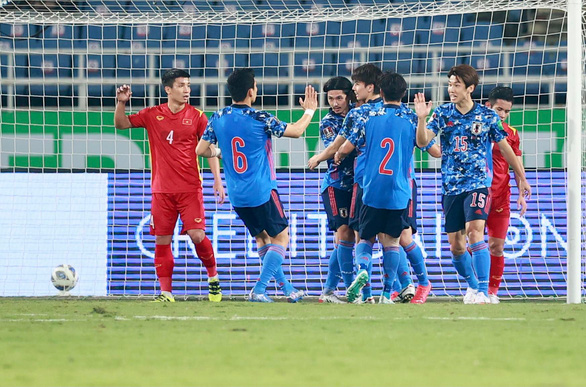 Vietnam fell 0-1 to Japan at My Dinh National Stadium in Hanoi on Thursday night, marking their fifth consecutive loss in the final FIFA World Cup qualification round.

Despite having the home field advantage, Vietnam were defeated by a much stronger Japan side that gave the Golden Stars few opportunities to put the ball in the net.

The only goal of the game was scored in the 17th minute by Junya Ito, who tapped in from a pass from Liverpool striker Takumi Minamino.

In the 40th minute, Ito sprinted down the left flank and finished in the top corner of Vietnam’s net but referee Hassan Mohammed declared that the ball had touched another Japanese player who was offside, thus ruling out the goal, after a five-minute VAR review.

Vietnam boosted their offense with several substitutions in the second half, but failed to make any real progress.

The Golden Stars’ best chance came in the 89th minute when substitute Luong Xuan Truong, who replaced fellow Phan Van Duc, whipped a free-kick into the box, causing mayhem in the Japanese area.

However, Truong’s shot from a Thanh Chung pass sailed over the crossbar.

Keeper Bui Tan Truong and the entire defense line managed to block several strong attacks through the remainder of the game, keeping the score at 0-1 until the final whistle.

The defeat left the Golden Stars rooted to the bottom of Group B with zero points and miles away from what was always an unlikely trip to the 2022 World Cup finals in Qatar.

The Vietnamese will play Saudi Arabia in Hanoi next Tuesday – a rematch of Vietnam’s 1-3 loss in September to their Middle East opponents.