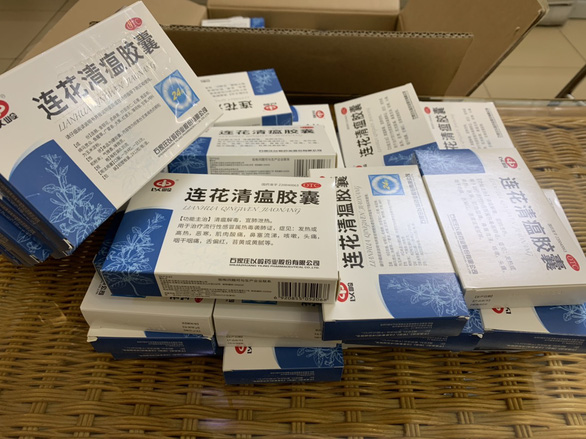 Market monitors in Hanoi seized more than 2,000 boxes of drugs allegedly for use in COVID-19 treatment and 1,000 coronavirus test kits, which were transported without documentation on the origin on Thursday.

The total value of the confiscated items was estimated at some VND456 million (US$20,000), the city’s Market Surveillance Department reported the same day.

A market surveillance team on Thursday detected 2,000 boxes of drugs with many Chinese characters, including the ‘Lianhua Qingwen Jiaonang’ brand, on their packaging when they examined a suspicious car in Nam Tu Liem District, the department said.

The owner failed to show any documents to prove the origin as well as the legality of the drugs but said the products were used in treatment of COVID-19 patients.

The value of the drugs was estimated at VND160 million ($7,014), according to the department.

The team imposed an administrative fine of VND90 million ($3,945) on the owner and seized all the illegal drugs for destruction.

Hoang could not produce invoices and papers validating the origin of the goods, but also said they were used in COVID-19 treatment.

The team impounded all the packs that were valued at around VND16 million ($701).

The same team also caught another man, Nguyen Viet Ha, 31, transporting 1,000 COVID-19 test kits on a street in the same district on Thursday.

All test kits had no invoices or documents and were valued at about VND280 million ($12,270), according to the team, which confiscated all the tests and fined Ha VND16 million.

On February 28, the city’s market surveillance force seized more than 3,000 boxes of drugs featuring the said Chinese words on their labels from an establishment in Dong Da District, VnExpress reported.

The seller had no papers for the goods and admitted that they had bought the drugs from a supplier on social media to resell them to consumers.

Such cases were detected amid rising COVID-19 infections in Hanoi, prompting locals to flock to buy such kits and drugs and leading to a high demand for such items.

Daily infections in Hanoi soared to 18,661 on Thursday, much higher than the 8,864 a week before, according to the ministry’s data.