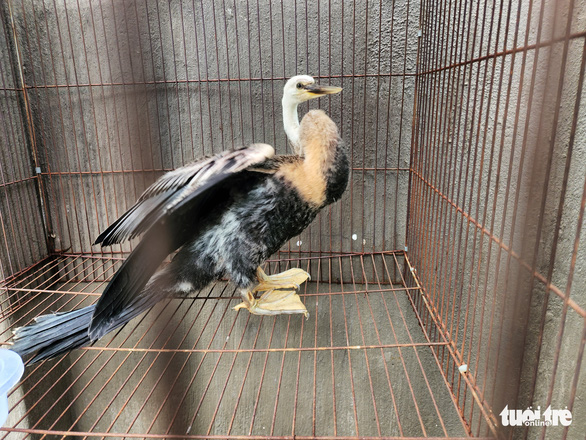 A man in Ho Chi Minh City handed over a 0.4-kilogram oriental darter he had caught to the local forest protection unit this week after learning that the bird is listed as rare and endangered.

Vo Thanh Long, a 39-year-old resident in Go Vap District, transferred the bird to the municipal Forest Protection Division, under the Department of Agriculture and Rural Development, on Tuesday.

The oriental darter, with the scientific name Anhinga melanogaster, belongs to the endangered, rare, and precious wildlife species of group IB that needs to be protected under a decree issued by the central government in 2019, according to local rangers.

According to Long, he spotted an unidentified long-necked bird standing on the roof of his home on Monday afternoon.

The bird did not take off after Long touched it with a stick.

Then, Long and his family used a ladder to ascend to the roof and catch the bird.

“When I caught it from the roof, I noticed it had duck-like legs," Long said.

"Through Internet research, I discovered that this is an oriental darter, a rare wildlife animal listed in Vietnam’s Red Book.

"I'd like to give the bird to the authorities so it can be released back into nature."

The rare bird was sent to the city's Cu Chi Wildlife Rescue Center for necessary care before being released back into nature.