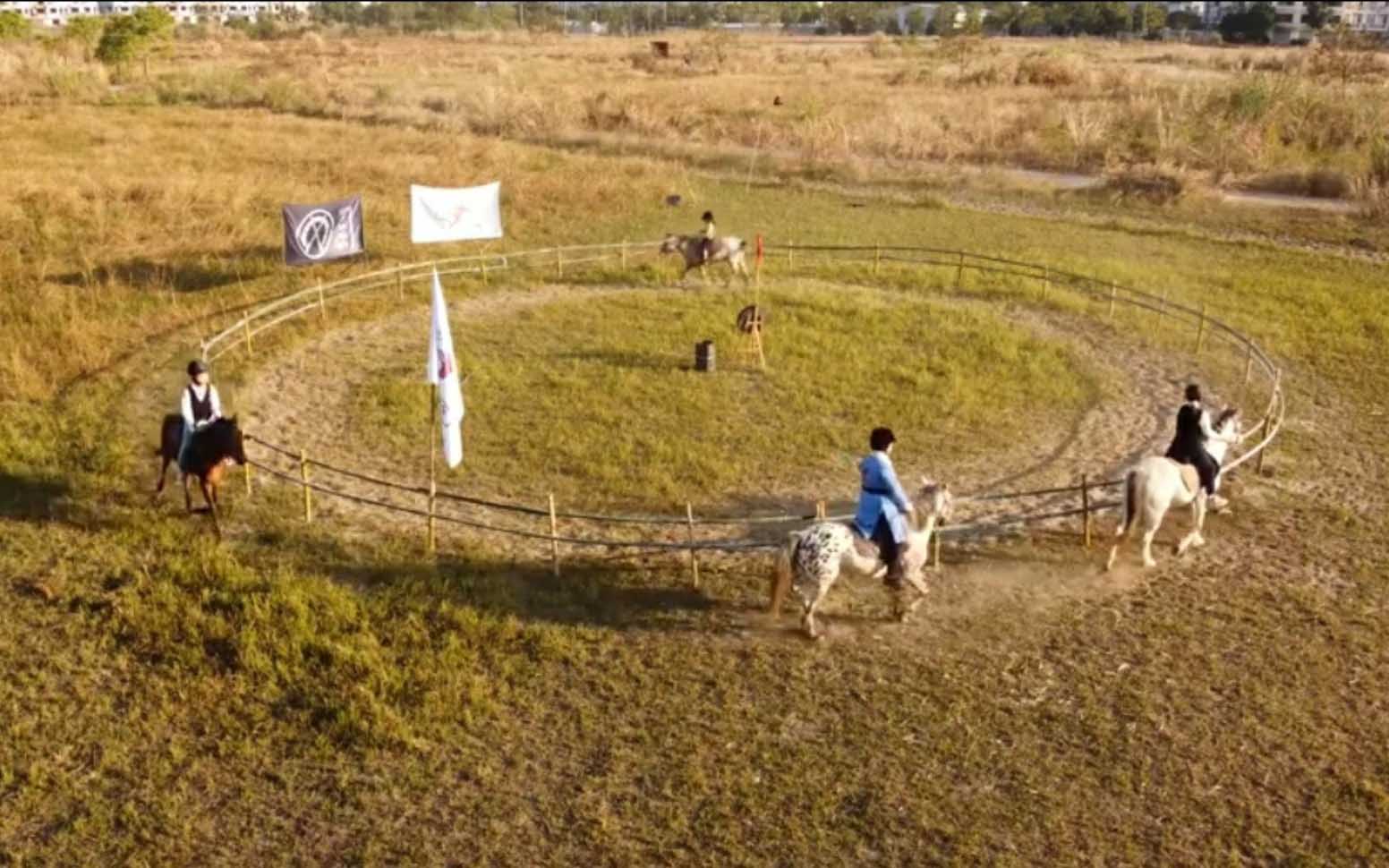 Mounted archery is gaining popularity among Hanoian youth eager to add a touch of swashbuckling drama to their lives.

Though archery has long been a pastime for many across Vietnam, shooting bows and arrows from the back of a horse has recently skyrocketed in popularity among Hanoian youth.

Imagine galloping across an open field on a well-trained horse, taking your hands off the reins, drawing an arrow, and firing at a target while moving at a full gallop.

That is mounted archery, a sport that requires an exceptional amount of both equestrian and archery skills, as well as complete trust between the horse and the rider.

Donning the traditional outfits made famous in Asian swashbuckler films, young people in Hanoi are taking to mounted archery to practice their horsemanship, swordsmanship, archery skills, and chivalry.

Fitness and more on horseback

Just like archery, mounting a horse is rooted in physical, moral, and spiritual development and considered by many as a test of mental discipline.

Mounted archery is not just about hitting a target. In competitions, an archer’s demeanor, deportment, bodily alignment, and accuracy can make the difference between a first place and a last place finish.

And there is no place better to learn these skills than at Hanoi Horse Club in Hoai Duc District, Hanoi, where young enthusiasts spend their days taking aim at targets while galloping at full speed.

At a recent event sponsored by the club, ten of its members took turns holding spectators in awe as they brought their horses to speed, dropped the reins, and fired their arrows.

The event was held as a simulation of old-time competitions undertaken by martial artists in imperial courts throughout East Asia.

In traditional outfits, the archers at the event rode their horse in a circle to greet spectators before showing off their horsemanship, swordsmanship, and archery skills.

The first archer to perform at the event began by guiding his horse in circles as it warmed up into a relaxed trot. After the warmup, the archer brought the horse into a full gallop as he drew an arrow and fired it into the center of a target.

The archer then showed off his ingenuity by firing arrows from a slew of different positions and angles, including from behind his back.

According to Hanoi Horse Club Coach Pham Van Phuc, a mounted archer’s success boils down to the chemistry between the rider and the horse.

“To be accurate from all positions and angles, an archer and his horse need to work in perfect tandem,” he said.

Only when the horse is galloping at the perfect speed can an archer successfully perform stunts with their hands off the reins and on the bow.

“The key is not to startle the horse. If the animal doesn’t cooperate, the archer may find themself struggling to perform stunts,” Phuc said, adding that things become even more difficult when the horse is galloping in a straight line, rather than a circle, because the horse is more easily startled.

Horseback archery was used for thousands of years by hunters and soldiers. Well-tamed, magnificent horses made mighty troops and successful hunters. They were conducive to victories on the battle field.

Though armies have largely abandoned mounted archer divisions, the sport remains a fixture at court ceremonies, traditional festivals, and contests in many countries, including Japan and South Korea.

In Vietnam, where mounted archery is on the come-up, it is often seen at village festivals such as the Dinh Vong Festival in Tan Yen District, Bac Giang Province.

Horse clubs have also sprung up in several cities and provinces across the country for both tourism and sporting purposes.

According to Nguyen Thi Hoa Hop, owner of Hanoi Horse Club, her club has spent the last year working to revive Vietnam’s affinity for the ancient sport.

“We have been planning a revival [of mounted archery] for a long time ago, but it’s not easy to find archers,” Hop said, adding that successful riders must excel at both horseback riding and archery.

“It takes much more than passion to master the sport.

“It requires spiritual concentration and stability. It is both physically empowering and mentally rewarding,” she added.

According to Phuc, it takes six months to a year for an experienced rider to learn how to properly handle a bow and an arrow while on a moving horse.

And of course, though Phuc welcomes everyone to give the sport a shot, he’s honest in saying not everyone can master the technique.

Even at Hanoi Horse Club, which boasts more than 100 members, only 10 are both skilled and brave enough to be mounted archers.

It’s not easy task for the horses either.

Only five horses out of the club’s 30 horses are used by mounted archers.

Many horse archery practitioners appreciate the perks of the sport: overall deportment, demeanor, and peace of mind.

“I feel perfectly calm when I’m practicing the sport,” Nguyen Ngoc Tan, one of the club’s archers, said, adding mounted archery helps him stay focused and keeps his temper in check.

There is also an added perk that Tan is thankful for: being able to dress up as an ancient Asian warrior.

The ancient pastime also helps him nurture his love for Vietnam’s rich history.

A member of an antique collection and restoration club, Phuc has a deep-rooted love for antiquity and history.

“We rebuilt ancient bows and practiced with them regularly at Long Thanh Archery Club,” Phuc shared.

His next step was to combine his love of ancient archery with his love of horseback riding.

“Unlike their modern counterparts, ancient bows are relatively easy to make because they don’t require accessories, such as specialized sights,” he explained.

But for many, the gear’s simplicity is a major draw as it inflates the sports’ technical difficulty.

Mounted archery is growing in popularity among young people across Hanoi.

Head over heel in love with the ancient pastime, the boy is always eager to perform.

Though horseback archery requires intensive training before riders can shoot targets while moving at speed, Khanh is quickly becoming an expert.

“I’m really into [mounted archery], it’s fascinating and more technically challenging than other sports, like when I have to maneuver the horse over different hurdles,” he shared.

“Many of my classmates are also big fans of mounted archery.”

Argentina drew 0-0 at home with Brazil in a tense and end-to-end game on Tuesday, but results elsewhere meant the point they earned was enough to secure them a place in next year’s World Cup in Qatar.

Mounted archery is not for the half-hearted

The reward was offered by real estate group Hung Thinh

The Vietnam Football Federation received a US$15,000 fine after supporters set off fireworks during an away match in Cambodia