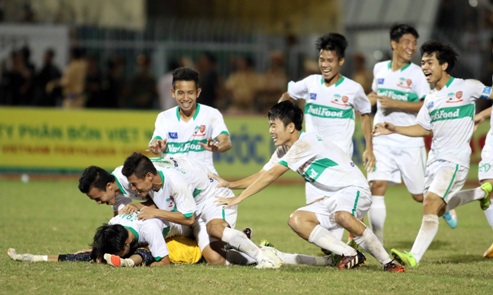 The new season of Vietnam’s top-fight V-League is four days away, with several changes to be made to the 14-team competition.

Tuoi Tre News would like to offer an overview of the most-anticipated team, trophy favorites, the club with the most local players, and the best fan club title.

The most awaited team

Among the 14 club members of the 2015 V-League, Hoang Anh Gia Lai (HAGL) FC will be the team most eagerly-awaited by fans thanks to the fielding of their under-19 players, who are graduates of the first seven-year training course of the HAGL-Arsenal JMG football academy.

During the latest matches involving the U-19 players at My Dinh Stadium in Hanoi, the Thong Nhat arena in Ho Chi Minh City and Can Tho Stadium in the Mekong Delta city of Can Tho, spectators packed the stands of the stadiums.

The friendly games of the HAGL U-19s with Phu Yen, Sanna Khanh Hoa, and Can Tho in December to prepare for the 2015 V-League attracted big crowds to their Pleiku Stadium.

Doan Nguyen Duc, the owner of HAGL, agreed to hire a French fitness coach to train the young players to ensure that each of them is strong enough to sprint a total of 10 kilometers per match.

The HAGL U-19 team are the only one in the V-League who took a foreign training trip, to Thailand, to prepare for the competition.

Cong Phuong, an under-19 player for HAGL, is the most prominent prospect in the 2015 V-League. He performed extremely well during the latest HAGL and Vietnamese youth team matches.

In the 3-0 win over Chonburi FC in Thailand on December 24, Phuong contributed two goals. Chonburi were the runners-up of the 2014 Thai Premier League.

Despite the prominence of the young players of HAGL, Binh Duong have emerged as the most eligible candidates to win the 2015 title thanks to their team of experienced stars such as Cong Vinh, Oseni, and Xuan Thanh.

Club with the most local players

Song Lam Nghe An are such a club. In the 2015 season, V-League clubs are allowed to enroll two foreign footballers each – instead of three as in the previous season – and one Vietnamese-naturalized player.

Apart from the three, Song Lam Nghe An have 23 domestic players from the home province of Nghe An, located in central Vietnam.

In 2015, the Vietnam Professional Football (VPF) company under the management of the Vietnam Football Federation will organize voting for the best fan club every month with a cash prize of VND20 million (US$962) to promote the support of fair play from fans.

In previous years, the prize was only given away at the end of the season.

The winner of the title for the best fan club of the entire season will get a prize of VND100 million ($4,800).

The fan club of Quang Ninh FC won the title in the 2014 season but Son Lam Nghe An believed they should have been named the winners.

The 2015 season will likely see a race between these two clubs and the fan clubs of HAGL, Binh Duong, and Dong Thap.