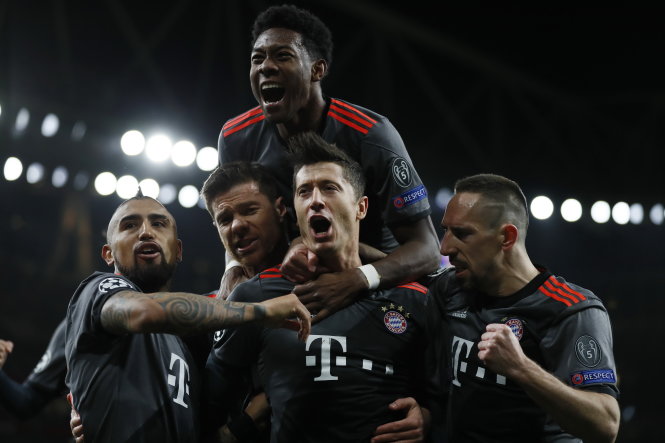 LONDON, March 7 - For an hour Arsenal were at least salvaging some pride against Bayern Munich, then the ceiling came crashing down as they exited the Champions League last 16 on Tuesday with a matching pair of 5-1 defeats against the merciless Bundesliga giants.

A second-half capitulation after captain Laurent Koscielny was sent off resulted in Arsenal conceding five goals for the first time at their Emirates Stadium as they suffered their worst home defeat for 19 years.

Arsenal were attempting an unlikely comeback after their horror show in Munich last month and were making a decent fist of it when Theo Walcott smashed in after 20 minutes.

But from the moment Koscielny was red-carded and Lewandowski converted the resulting penalty in the 55th minute, Arsenal's belief ebbed and Carlo Ancelotti's side ran amok with Arjen Robben, Douglas Costa and Arturo Vidal piling on the agony.

By the end Bayern were threatening to surpass the 12-1 aggregate score they piled up against Sporting Lisbon in 2009 but had to be content with a 10-2 margin that sent an ominous warning to whoever they face in the quarter-finals.

Before kickoff some Arsenal fans staged a small protest calling for manager Arsene Wenger to end his 21-year reign at the club.

Those calls will grow louder now after a seventh successive exit at the last-16 stage of the Champions League.

Yet Wenger was belligerent afterwards, blaming referee Tasos Sidiropoulos for killing off his side with the sending off of skipper Koscielny, whose injury shortly after halftime in Munich prompted a similar Gunners collapse.

"I felt that we produced a performance with spirit and pride that we wanted and after that the story finished badly," Wenger told reporters. "The fact the end result will not highlight the quality of our performance is very disappointing."

Ancelotti, bidding to win the Champions League with a third club after triumphs with AC Milan and Real Madrid, had some sympathy for his under-fire former Premier League adversary.

"Until the penalty it was a difficult game and Arsenal played very well," he said. "It was a strange game. The result doesn't reflect what happened on the pitch."

With Alexis Sanchez restored to the starting lineup after being dropped by Wenger against Liverpool there was a verve about Arsenal in the first half.

When Walcott thumped a shot past Manuel Neuer from a tight angle and had a penalty appeal turned down after appearing to be tripped by Xabi Alonso, Bayern were rattled.

Walcott hit the side-netting with another blast and Olivier Giroud headed against the post before the Frenchman headed an even better chance wastefully over just after halftime.

Then it all went horribly wrong for the hosts.

Lewandowski was shoved by Koscielny as he ran through in the 55th minute and Sidiropoulos, who had initially only shown a yellow to the defender, reached for his red card. Lewandowski sent David Ospina the wrong way from the spot.

Robben then capitalised on a mistake by Sanchez to run through and put Bayern ahead before substitute Douglas Costa curled in a stunning third in the 78th minute.

If it had been a boxing match the towel would have been thrown in but there was no hiding place and Vidal struck two late goals, both from close-range as the home defence went AWOL, to the unbridled glee of Bayern's sizeable support.