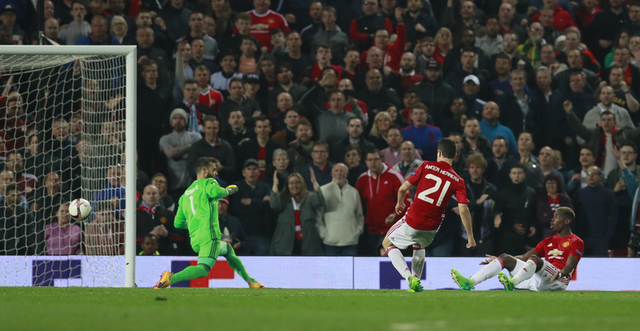 United cling on against Celta to reach Europe League final

May 11 - Manchester United survived a fraught finale, featuring an ugly brawl and a red card for each side, to draw 1-1 at home to Celta Vigo and reach the Europa League final on Thursday.

United, who won 2-1 on aggregate, will face Ajax Amsterdam in Stockholm on May 24 after the Dutch side overcame Olympique Lyonnais 5-4 on aggregate after a 3-1 defeat in Lyon.

Leading 1-0 from the first leg of the semi-final in Spain, United thought they had killed off the tie when Marouane Fellaini headed them in front after 17 minutes.

United sat back and allowed Celta to dominate possession but looked comfortable until Facundo Roncaglia headed the visitors level in the 85th minute, meaning another goal for the Spaniards could have put them through on away goals.

Tempers flared shortly afterwards when United's Ivory Coast defender Eric Bailly lashed out at John Guidetti, who fell to the ground, before Argentina international Roncaglia got involved. Roncaglia and Bailly were sent off.

Guidetti had a chance to win the tie for Celta with the last kick of the game but failed to control the ball six metres from goal.

"We were the best team in the first leg but we never kill, we never score goals related to the chances we have. It was an open game at home, all the pressure on our side," said United coach Jose Mourinho.

"We suffered until the end... After 14 matches we are in the final. If we win the Europa League I am more than happy. It would be amazing."

Mourinho, who has targeted a Europa League triumph as a way for United to qualify for next season's Champions League, described Ivorian defender Bailly's performance as phenomenal.

"The game was emotional for everyone. Some kept control better than others," he said.

"Facundo Roncaglia is not new in these situations, Bailly was probably naive. We now lose a very important player for the final, and we don't have many."

Celta, whose fans made most of the noise, were lively from the start but United went ahead when Fellaini got in front of his marker to head in at the far post after Marcus Rashford drifted out to the left and delivered a perfect cross.

The hosts were then happy to sit back and contain Celta, making the game strangely subdued. The visitors moved the ball around nicely but failed to make the most of their chances.

United kept the visitors at bay during six minutes of stoppage time and the Celta players sank to their knees in despair as the whistle blew seconds after Guidetti's miss.