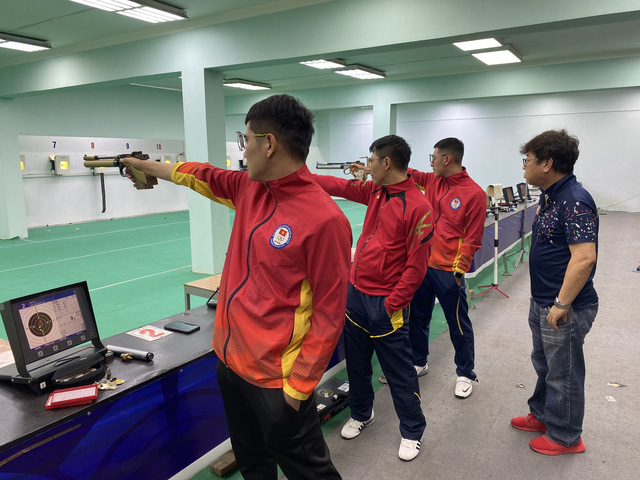 Vietnam will not compete in shooting competitions at the upcoming Tokyo Olympics after three athletes, the team’s last hopes of qualifying for the world’s biggest event in sports, crashed out of a world cup in India this week.

The Vietnamese marksmen – Tran Quoc Cuong, Phan Xuong Chuyen, and Nguyen Dinh Thanh – did not qualify for the men’s 10m air pistol final at the ISSF World Cup in New Delhi on Saturday.

Thanh shot a total of 573 points in the qualification round, ranking 13th overall and falling short of the 576 mark needed to advance to the final round.

Cuong and Chuyen shot 569 and 567 points, ranking 16th and 20th in the qualification round, respectively.

The annual ISSF World Cup, organized by the International Shooting Sport Federation since 1986, provides a system for qualification for the Olympics' shooting competitions.

It is the final supervised championship where professional shooters can improve their world ranking in the hope of securing a berth at the 2020 Tokyo Olympics, which have been postponed until this summer due to the COVID-19 pandemic.

Host nation Japan has been guaranteed 12 quota places with one in each of the individual shooting events.

The highest-ranked shooter, who has not qualified yet or whose national Olympic committee does not have a berth in any of the 12 individual events, will obtain a direct Olympic ticket through the ISSF World Rankings system.

Vinh did not participate in any of the qualifying tournaments leading up to Tokyo 2020.

He shocked fans with his elimination from the men’s 50m pistol final at the 2017 Southeast Asian (SEA) Games in Malaysia, the same event that won him an Olympic gold just a year earlier.

With Vinh out of the picture, Cuong was the Vietnamese shooting team’s brightest hopeful entering the New Delhi World Cup this week.

Cuong is currently ranked 17th, and climbing just one place to the 16th position could have won him a quota place at the Tokyo Games.

The global COVID-19 pandemic, which disrupted the Vietnamese shooting squad’s overseas tranining plans in 2020, was blamed for the athletes’ poor form at recent tournaments.

Meanwhile, shooting facilities in Vietnam are said to be ill-equipped to accommodate their practice needs.

The 2020 Tokyo Olympics are scheduled for July 23 to August 8 and the Paralympics from August 24 to September 5.

Japan has decided this summer’s Games, already postponed a year due to COVID-19, will be staged without overseas spectators due to public safety concerns, organizers said on Saturday.