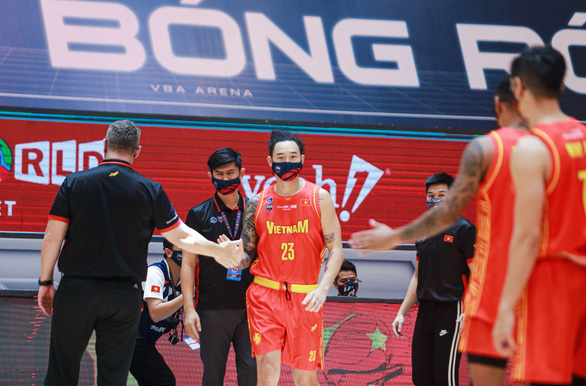 Star player Tam Dinh of the Vietnamese national basketball team attracted attention, despite not playing due to injury, by enjoying a slice of watermelon while watching his teammates defeat Nha Trang Dolphins in Game 17 of the VBA Premier Bubble Games - Brought to you by NovaWorld Phan Thiet.

Dinh was benched due to an injury in the Vietnamese national basketball team’s first-ever clash with the Dolphins.

He had suffered the serious injury in Game 16 against Saigon Heat when he had landed on his left shoulder in an attempt to block the ball from Daquan Bracey.

In order to preserve a strong formation for the important coming matches, coach Kevin Yurikus allowed Dinh to spend Game 17 on the bench.

The images of Dinh cheering for his teammates from outside the court impressed fans, especially when he was eating fruit.

It was easy to understand for a food lover like Dinh, who is 1.92 meters tall, to boost his energy with food anytime, anywhere.

He savored a slice of watermelon while accompanying Richard Nguyen, who was on a cycling machine to warm up his body, taking advantage of the downtime waiting for staff to clean the floor before returning to play.

From his expression while eating and chatting with Richard Nguyen, Dinh seemed to have little concern for the match, feeling confident about a victory for his team.

After Dinh’s six years of competing in the VBA since it was established, the moment showed a new side to fans, who are more familiar with a brave curly-haired star player that is always fierce on the court.

Game 17 of the VBA Premier Bubble Games - Brought to you by NovaWorld Phan Thiet was competed by Nha Trang Dolphins and the Vietnamese national basketball team.

In the absence of a strong scorer like Tam Dinh, young defender Nguyen Minh Ton spearheaded the national team’s attacks and together with his teammates dictated the game.

Meanwhile, Nha Trang relied on the talent of foreign players and defender Thanh Dat to pull back the play.

However, the longer into the game, the more the national team proved their superiority before claiming a convincing 92-80 victory.