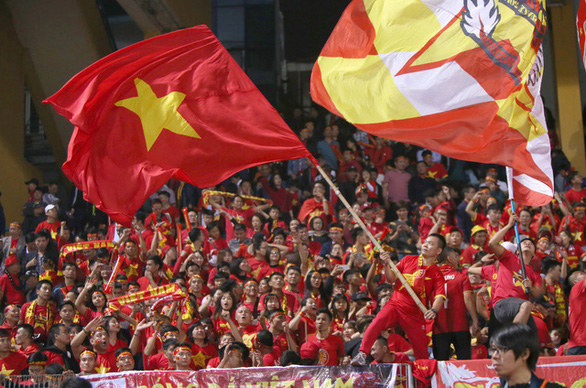 The Vietnam Football Federation (VFF) has required spectators to undergo paid COVID-19 tests before attending Vietnam’s games at the national stadium in Hanoi in the final round of the 2022 FIFA World Cup Asian qualifiers later this month.

A negative test result issued no more than 72 hours before the referee blows the whistle is among the requirements for spectators before entering My Dinh Stadium in Ba Dinh District for Vietnam’s matches against Japan on November 11 and Saudi Arabia on November 16 in the Asian qualifiers’ final stage.

The VFF has selected MEDLATEC general hospital as the designated unit to conduct the virus tests, using the rapid antigen method, at a cost of VND100,000 (US$4.4) per person.

Spectators can visit any of MEDLATEC’s 37 facilities across the country to take the test.

They must present tickets to the games and personal papers upon their arrival at those venues.

Previously, the Hanoi People’s Committee allowed related units to sell tickets at 30 percent of My Dinh’s 40,000 seating capacity so that a maximum of 12,000 fans can lively support Vietnam in each of their two World Cup qualifying matches.

The decision was carefully considered, given the complicated COVID-19 developments in Hanoi and throughout Vietnam that had caused the national football tournaments and international games hosted by the Southeast Asian country to take place behind closed doors.

The VFF said My Dinh Stadium will start welcoming spectators from 4:00 pm, or three hours prior to each game, on the matchdays.

Spectators must show their tickets, a negative COVID-19 test certificate issued no more than 72 hours earlier, and personal papers to staff working at the stadium, have the electronic health book or PC-COVID-19 applications installed on their phones to make medical declarations and scan QR codes, and wear a face mask during the entire stay at the venue.

Hanoi, whose population is over eight million, has recorded 4,924 local infections since the fourth coronavirus wave flared up in Vietnam on April 27.

Nearly 6.1 million people of the capital city have received the first doses of COVID-19 vaccine, with over four million of them fully vaccinated, according to the national COVID-19 vaccination portal.

Vietnam has found 946,043 infections since the COVID-19 pandemic first hit it early last year and 941,159 community transmissions in 62 out of its 63 provinces and cities since the fourth virus wave broke out.

More than 26 million people of the 98 million population in the Southeast Asian country have been fully inoculated against the coronavirus.

The central government has relaxed pandemic control curbs over the past few weeks as transmissions have slowed down, due partly to larger vaccine coverage.

However, the number of infections has appeared to rebound in several locales in recent days.