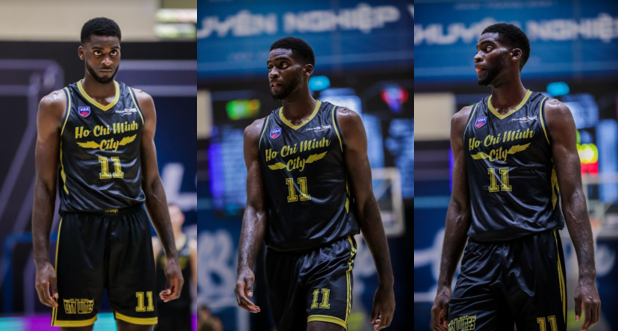 Ho Chi Minh City Wings suffered a defeat against Hanoi Buffaloes in Game 33 of the VBA Premier Bubble Games - Brought to you by NovaWorld Phan Thiet after key player Makinde London was disqualified.

Makinde London is known for his aggressive play style and for racking up fouls while blocking his opponents.

In Game 33, London was disqualified in the final quarter after committing five personal fouls.

In Game 28, Bui Anh Khoa, another player on Ho Chi Minh City Wings, was also disqualified with about five minutes left in the game.

Ho Chi Minh City Wings is the only team that has had two players disqualified due to personal fouls this season.

The absence of Makinde London resulted in a loss for the Wings, although the team led the game 54-49 at the end of the third quarter.

Hanoi Buffaloes were able to turn the table after taking advantage of the weak point in Ho Chi Minh City Wings’ defense line.

The pressure on the Wings’ defense line also caused trouble for the team’s offense.

Without London, Jeremy Smith as unable to outplay Mike Bell and Anthony Moody of Hanoi Buffaloes.

This proved the significant role of Makinde London on the team, and Ho Chi Minh City Wings will need to try its best to prevent key players from committing too many personal fouls.

Game 33 of the VBA Premier Bubble Games - Brought to you by NovaWorld Phan Thiet saw a battle between Ho Chi Minh City Wings and Hanoi Buffaloes.

In the final quarter, a successful three-pointer sunk by Hanoi Buffaloes’ Tien Duong ended all hope for the Ho Chi Minh City Wings.

The Buffaloes won the game 67-71, and Mike Bell was named Most Valuable Player (MVP) with 18 points, 21 catches, and five assists.