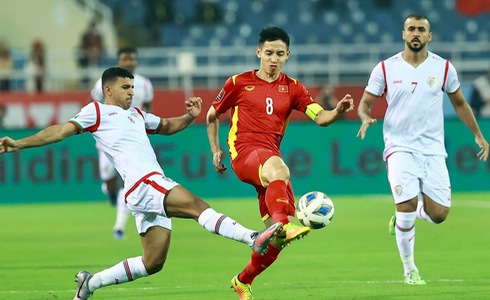 Vietnam finished their last home game of the 2022 FIFA World Cup Asian qualifiers with a 0-1 loss to Oman at My Dinh National Stadium in Hanoi on Thursday night.

The game was a rematch between the two sides after a previous meeting last October, when Vietnam were defeated 1-3.

The Vietnamese squad came out strong in the first few minutes of the match, but Oman’s positioning was solid.

Nguyen Tien Linh missed a chance to head a cross from Nguyen Quang Hai into Oman’s net in the 32nd minute.

Both teams went into halftime with no points on the board.

Both Vietnam and Oman made a substitution after the break, with the former replacing Nguyen Tuan Anh with Nguyen Cong Phuong.

The Golden Stars pushed forward and took multiple shots from the corner but failed to find the back of the net.

Vietnam thought it had a chance when a corner kick in the 57th minute appeared to hit the hand of an Omani defender, but the VAR room failed to award a penalty.

From a corner in the 64th minute, Khalid Al-Hajri scored Oman’s first goal of the match with a header that sailed past keeper Tran Nguyen Manh.

Nguyen Quang Hai was awarded a free kick from 20 meters out where Nguyen Cong Phuong was fouled in the 74th minute.

His shot looked good until Omani keeper Al Mukhaini made an astounding save.

Both sides spurned their respective clear-cut chances in the remainder of the second half until the referee blew the final whistle.

While both Vietnam and Oman have no chance left to qualify for the 2022 FIFA World Cup, Thursday’s result means that Oman retain their fourth position in Group B and Vietnam are still at bottom.