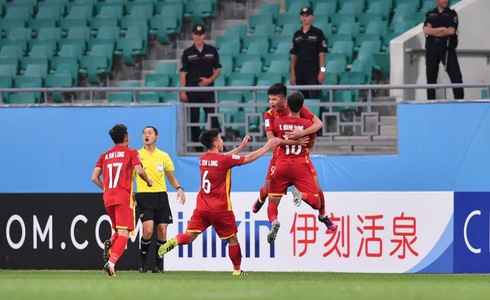 Vietnam took the lead twice but let Thailand even the score both times and accepted a 2-2 draw in Group C of the 2022 AFC U23 Asian Cup at Bunyodkor Stadium in Uzbekistan on Thursday night.

Vietnam took the lead in the 18th second of the match only for a fighting Thailand to level the score in the 34th minute.

The young Golden Stars netted a second goal in the 73rd minute, but were denied a chance at victory when their Southeast Asian rivals equalized with a stoppage time goal.

Phan Tuan Tai handed Vietnam a dream start as he intercepted Jonathan Khemdee’s pass and proceeded to net a shot from nearly 20 meters out with the ball deflecting off Khemdee’s shoulder and over an outstretched Kiadtiphon Udom.

It was the third-fastest goal in the history of the AFC U23 championship.

One of them, Benjamin Davis, made a difference in the 34th minute when he scored an equalizer for Thailand with a powerful long-range shot that deflected off goalkeeper Nguyen Van Toan but wound up drifting back into the net.

In the second half, both Vietnam and Thailand put several players on the pitch to increase their attacking power.

In the 73rd minute, Nguyen Van Tung produced a beautiful volley after Tuan Tai’s pass, putting Vietnam ahead for the second time.

Suphanat Mueanta once again pushed the match into a tie when he headed home Korawich Tasa’s cross in the second minute of added time.

The 2-2 draw puts Vietnam in third position in Group C and Thailand in second.

Vietnam are scheduled to take on South Korea on Sunday while Thailand will compete against Malaysia.

Vietnam made it to the finals in the 2020 edition of the championship and were the runners-up in 2018.