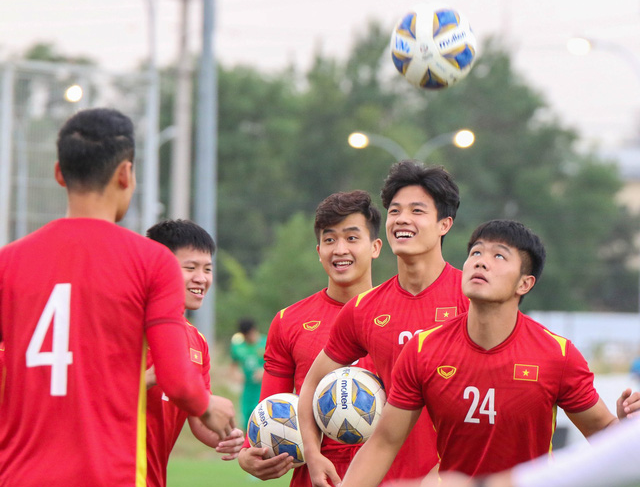 Vietnam are ready to surprise their opponents in the quarterfinal match against Saudi Arabia at the 2022 AFC U23 Asian Cup in Uzbekistan on Sunday night.

The battle between Vietnam and Saudi Arabia is scheduled to start at 11:00 pm on Sunday (Vietnam time) and will be aired on VTV6 Channel and FPT Play.

Saudi Arabia are very strong contenders, Vietnam's coach Gong Oh Kyun said at the press meeting prior to the match, adding that the Middle East team advanced to the quarterfinals without conceding any goal.

However, Vietnam are ready for the challenge and will give the best possible performance in the upcoming match, he stressed.

Saudi Arabia were the runners-up of the 2020 AFC U23 Asian Cup in Thailand and are the top candidates for this year’s championship.

The team scored seven points in the group stage, only one point lower than hosts Uzbekistan.

Experts believe that Saudi Arabia have yet to showcase their true power as midfielder Hassan Tambakti and star striker Al-Buraikan were absent from the group stage due to their schedule with the senior team.

However, the two are now ready to join the under-23 team in the quarterfinal match against Vietnam.

Going against Saudi Arabia’s strong offense, coach Gong said he had reinforced Vietnam’s defense line, as well as prepared the players for the penalty shootout.

In their three matches in the group stage, the Golden Stars competed with three different formations, thus experts have every reason to believe that coach Gong and his protégés will continue to surprise their opponents in the quarterfinal.

The return of striker Tran Danh Trung, who was benched in the previous two matches due to his ankle pain, will also be good news for the Vietnamese.

Running from June 1 to 19, the 2022 AFC U23 Asian Cup is the fifth edition of the biennial international football championship organized by the Asian Football Confederation (AFC) for the under-23 national teams of Asia.

Vietnam, who have made their fourth appearance at the tournament this year, finished second at the 2018 edition.