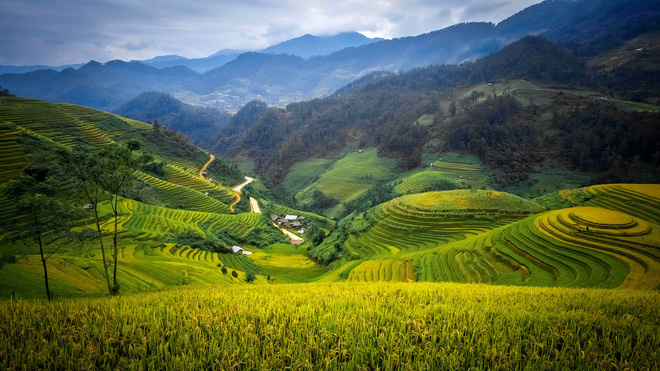 Mu Cang Chai District is located some 300 kilometers from Hanoi and can be reached by train, bus, car, or motorbike.

Its famous terraced fields, which cover more than 2,200 hectares of land, were officially recognized as one of the seven special national sites by Vietnamese Prime Minister Nguyen Xuan Phuc just last week.

In 2007, the Ministry of Culture, Sports, and Tourism also designated 500 hectares of the rice terraces as a national heritage site.

In an article published on January 5, CNBC described Mu Cang Chai as a remote gem deep in the valleys forged by waters of the Red River with a series of colorful mountain villages encircled by fields of towering rice terraces.

“The fields are agricultural feats of precision — rugged mountains blanketed with emerald stairways that, seemingly, ascend to the heavens above,” the article reads.

The site went on to describe how rice terraces have been grown in Mu Cang Chai, saying the ancestors of northern Vietnam’s local hill tribes centuries ago created this beautiful place for the most basic of reasons — to survive.

CNBC particularly suggested that the three villages — La Pan Tan, Che Cu Nha and De Xu Phinh — are must-see spots for any traveler in the region.

For what to do in Mu Cang Chai, the U.S.-based news site recommended trekking, cycling, and photography.

It added that local festivals attract record numbers of tourists every year as well, including an autumn paragliding festival that is helping to establish Mu Cang Chai as a new destination for adventure travel.

Other popular activities include traversing the breathtaking Khau Pha Pass and exploring the Mo Waterfall and Pu Nhu Waterfall.

The site stated there is never a bad season to see Mu Cang Chai, as the rice terraces are beautiful year-round.

“In the spring, near-neon shades of green arise as the seedlings sprout from the water. In the warm summer months, brilliant green terraces fill the countryside with bursts of color,” it said.