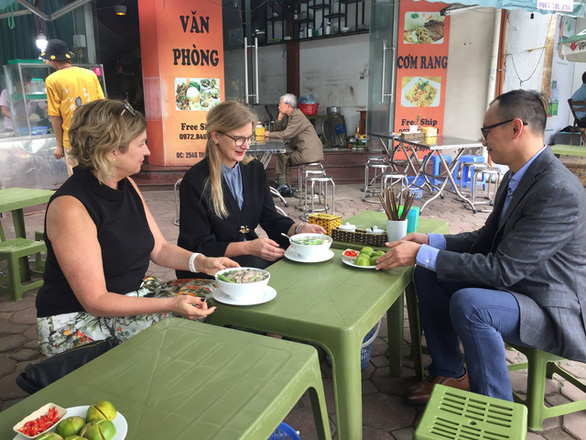 Tuoi Tre (Youth) newspaper and the Ministry of Foreign Affairs will cooperate to organize a gala dinner for diplomatic missions and the media to honor pho, a hallmark Vietnamese beef noodle soup, in Hanoi on December 10.

The Vietnamese Ministry of Foreign Affairs’ spokesperson Le Thi Thu Hang made the announcement at the regular press briefing on Thursday afternoon.

“The event will bring together the most famous Vietnamese pho chefs, along with interesting stories behind the formation and value of pho in Vietnam’s culinary culture, in order to introduce distinctive flavors of Vietnamese pho to international friends,” Hang said.

It is expected that about 150 ambassadors and representatives of diplomatic delegations and foreign press agencies in Vietnam will attend the special gala night.

On behalf of the organizers, the spokeswoman invited reporters to the event.

The gala dinner is in the framework of the fourth edition of Tuoi Tre’s annual initiative ‘Day of Pho.’

December 12 was officially designated as the ‘Day of Pho’ – a celebration of Vietnam’s most popular dish – in 2018, one year after the first 'Day of Pho' was held.

This year’s ‘Day of Pho’ is themed “Sublimation of Vietnamese Cuisine.”

Several activities have been held in honor of the special day, including the continuation of a cooking contest to find the best pho chefs and a vote-based competition to choose the top ten pho brands most favored by consumers in Vietnam, which were also held last year.

Furthermore, a writing and photography contests with the theme ‘Pho in me,’ encouraging both domestic and overseas readers to tell their stories about pho in text and visual formats, received many high-quality entries.