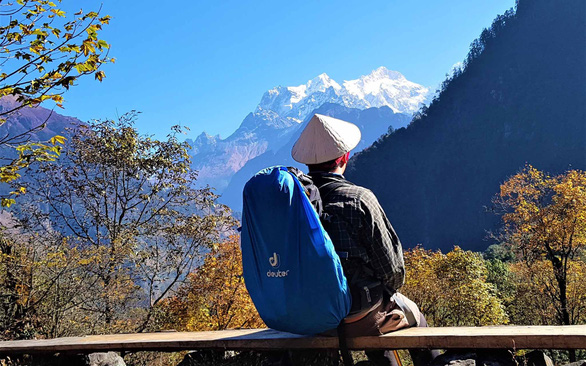 Earning more than VND20 million (US$864) a month, many young Vietnamese people choose to spend their fortune on experiences instead of saving for houses or cars.

"It was also a goal that I lived up to.

"After realizing my friends jostled in a rat race and gave up all their hobbies just to have a house, I chose the other way around.”

Securing a stable job with a good salary after graduation and opening his own shop, Quan has done well for himself, but instead of saving up for an apartment, he spends it all on traveling.

To Quan, it is a great luck to have companions who cannot only be together on the way but also share the same core values.

She has never stayed at one company for more than two years as she quits her job for every trip that takes months.

“I have worked at different start-up companies at which working overtime is just common," she said.

"The lifespan of these jobs is short, only one to two years.

"Therefore, there were months when I was flooded in work and others when I traveled two or maybe three times.”

Ngan is not among tech geeks who spend their money on gadgets, for most of her income is poured into trips.

For every person, there is a choice

“In our time, everything is different from our parents’ old norms. Who knows how it will be tomorrow?" Quan said.

"It will be never enough.

"When you have one, you want some more.

"I have witnessed a lot of my friends being trapped in those vicious circles but it may be their goals which keep them up every day."

His goal is to experience, live in different places, and bring joys to parents.

Although owning private vehicles is common sense in Vietnam, Quan got used to riding public transit.

The simple joy of walking and commuting by bus inspired him to sell his own motorbike, leaving days of crawling in chaotic flows of traffic behind.

Quan can now simply lock his room and go on a trip for a couple of months without worrying about robbery.

Several years ago, Quan planned to come back to his hometown to take care of his parents.

“When my parents were still healthy, I brought them to Thailand and Indonesia every year," he said.

"The list of countries we expected to travel together was long if my mom did not suffer walking abnormalities.

"My plan to come back home also had to start earlier.”

Although Hien Ngan said she was not the type of child that parents could show off to neighbors yet, she was still proud of sending home money.

Whenever Ngan quits a job, there are a bunch of questions waiting for her to answer, on her next destination or upcoming plans.

"It does not mean I lose control or become indifferent.

"I simply stop expecting things to happen as I want it to be.”

Ngan added trips helped her to expand her horizons and open up more opportunities.

Besides her main job, Ngan is also a freelancer working on different commissions when traveling or during slow days.

“It is another advantage of people having itchy feet," she said.

"Not having a lot of assets yet I am not afraid of changes and know how to be flexible to survive.”

Quan, on the other hand, carefully researches insurance packages, especially those for travelers.

“Health is what costs the most when it's at risk," he said.

"Being aware of this, I always have regular check-ups, eat carefully, and buy insurance for my long-distance, weekly trekking trips.”