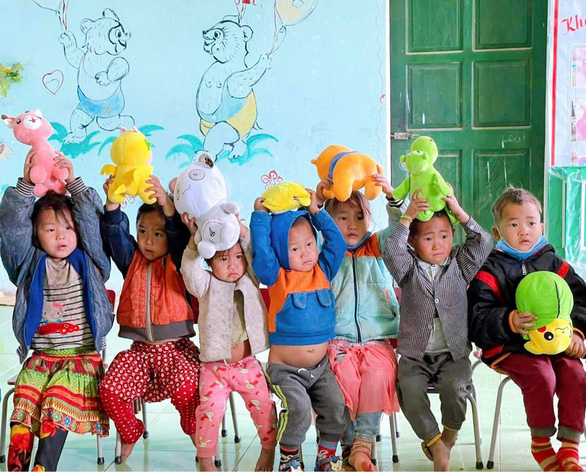 Playing claw machines as her hobby since 2017, Le Nhu, a woman living in Ho Chi Minh City, found herself with a special passion.

But she plays it for fun, not because of getting cuddly toys.

Nhu, 29, who hails from the southern province of Binh Phuoc, loves crane games.

She has become so good at playing the game that she wins nearly every time.

As the woman does not like stuffed animals, they have piled up in the hundreds in her closet.

Now, she wants to donate them.

One day, feeling touched after watching videos on the social media site TikTok showing poor children living in the northern mountainous regions, Nhu decided to give all her stuffed toys to them.

She contacted Giang A Phon, a locally known volunteer in the northern mountainous province of Ha Giang, to ask him to help realize her plan.

Nhu wanted to give all of her stuffed animals to disadvantaged children in Ha Giang.

“In my opinion, the children in mountainous regions like Ha Giang are still short of food, clothes, let alone cakes or toys, so they would be extremely happy to get these stuffed animals,” said Nhu.

“I brought the toys to have them processed by vacuum sealing before sending them to Giang A Phon.

"On November 10, Phon helped me give the toys to poor children.

"Receiving the photos that were taken by Phon made me extremely happy and I would like to share them with everyone."

The stuffed animals she sent to needy children in Ha Giang in November were her 'achievements' in 2020. All of them had been put into four plastic bags after vacuum sealing.

To her, the happiness of managing to claw a stuffed animal is bigger than buying one. Nhu often jumps for joy when she can ‘catch’ her ‘prey.’

After playing the game for the first time in 2017, she learned and trained herself to become a 'professional player.' She can get a toy nearly 100 percent of the time.

Sometimes, when she goes to the cinema with friends, she plays her favorite game to catch some animals to give to them.

For the past few years, Nhu has spent more time hanging out with friends and playing more claw machines, for she earns a good income from a stable job.

She does not like stuffed animals, however, so after coming back home with rewards from the games, she often puts them into a big plastic bag.

“I like clawing rather than playing with a stuffed bear,” she told Tuoi Tre (Youth) newspaper.

She is overjoyed but there are some things that made her think twice.

“There are two comments that make me think," she admitted.

"One person said that ‘instead of giving the teddy bears, you should have used the money that you used to play crane games to send to the poor children as the kids are short of food and clothes'.

“Another one said that I should have sold the stuffed animals then sent money to help the poor children buy clothes, books, and other necessities."

Nhu has her own thoughts, however, to believe that what she has done to help the poor will have a certain meaning.

“In fact, I would like to share my toys to bring happiness to the deprived children,” Nhu explained.

“The children’s smiles make me happy.

"At the end of the day, the physical gifts are equally valuable to the mental ones in my opinion."

Nhu expressed her hope that the pandemic will end soon so she can start her favorite game again and claw more toys to donate to the children in need.

Giang A Phon, the volunteer who helped Nhu bring the toys to the poor children in Ha Giang, said, “the children don’t have any toys. So, all of them were eager to see them for the first time."

“On opening the bags, our team’s members were surprised to see the way of packing, which is incredibly careful and clean," Phon recounted

"Only a person with a sympathetic soul could do that.

“This is the first time I have ever got such a big quantity of teddy bears."