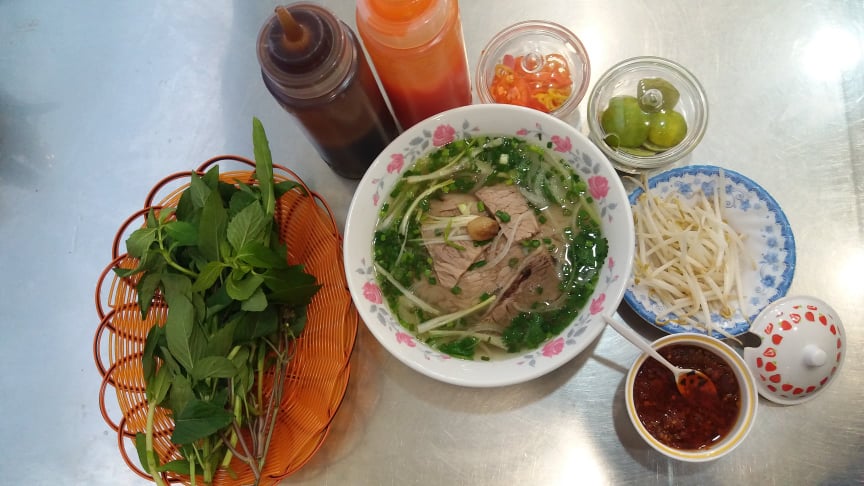 Foodies in Vietnam have recently been sharply divided over their opinions on the country’s most famous dish: pho.

It is obvious that pho is the signature dish of Vietnam, with its name being defined in many English dictionaries such as Cambridge, Oxford, Merriam-Webster, and Collins Cobuild.

“Pho is a soup made of beef or chicken broth and rice noodles,” Merriam-Webster defines.

It is true that there are two main types of pho in Vietnam, including pho bo with broth cooked from beef bone and topped with beef, and pho ga consisting of chicken broth and topped with chicken meat.

However, pho is made and served differently in different regions in Vietnam, from north to south.

And that is where the stir is caused.

Last week, a member of a food reviewing Facebook group shared his thought after tasting the dish at a restaurant in District 5, Ho Chi Minh City.

In his post, the author expressed his disappointment at the pho at the place, criticizing the broth flavor as well as the quality of the meat served.

In addition, he made some comparison of the way people in the northern and southern regions enjoy the noodle dish.

The post quickly became a debate on the 6,200-member group, as it has commanded the attention of 2,400 people who liked or reacted with the 'haha' or 'angry' buttons.

More than 1,400 comments were also made, with many of them criticizing the post’s author for his negative tone when comparing pho in the two regions.

“Taste is different from place to place,” one wrote.

Meanwhile, a number of the post’s viewers agreed with the author, explaining that pho is a dish originating in the northern region so it should taste the northern way.

The conversation has gone beyond the group, with 1,300 people sharing it to continue discussing the issue.

For those who do not know much about pho, the way itis cooked and served in the north and the south does have some differences.

One of the most obvious disparities is the northern pho normally uses flat noodles while the southern version has its noodles a little thicker.

Besides, pho is served with mung bean sprouts, herbs, and chili and hoisin sauces in the south, whereas that in the north comes with bagel twists, chili sauce, pickled garlic, and spring onion.

Another big discrepancy comes from the flavor, as the northern pho’s broth is said to be gentle and light while the southern dishis believed to be bold and fattier.

The topping choices are also thought to be more various in the south with different options of beef meat, beef tendon, and beef meatballs.

Actually, the debate over the two styles of pho is no longer new in Vietnam, to both locals and foreigners.

In October 2017, American food vlogger Sonny Side featured pho in a video on his Best Ever Food Review Show YouTube channel with more than 6.6 million subscribers.

In the second part of the episode titled '$2 PHO vs $100 PHO - Northern VS Southern Pho!,' which has attracted more than 7.7 million views so far, the Ho Chi Minh City-based vlogger joined his friend Andrew for a dining experience at a pho stall in District 1 that is over 50 years old.

“As much as I like southern pho, it’s a little sweet for me,” Side commented.

“If I’m getting very picky, I would say the northern [pho] is better,” he added, only to receive opposition from his friend Andrew.

“I would completely disagree,” the friend replied.

The two’s conversation attracted a pho fan who left a comment saying she loved both the northern and southern pho.

“There is no objectively better pho as northern and southern pho tap into your food senses differently: one focuses on the exquisite refinement of the broth, pho noodles, and meat, while the other focuses on the sensory harmony created from diverse ingredients and a ‘kick’ from the stronger broth,” said Phong Lan Phan Ngoc, who was born and lived in Hanoi for 15 years before moving to Ho Chi Minh City.

Indeed, it seems to be hard for people to be 'objective' when it comes to food experiences, or do they ever need to be objective?

The debate over pho in the north and south has been joined by some people from the central region of Vietnam, claiming their pho is also a great version to try.

So what do you think about Vietnamese pho? Which style is the best for you, north or south?

Do not hesitate to share your thought via ttn@tuoitre.com.vn on the most famous and debatable dish of Vietnamese cuisine.