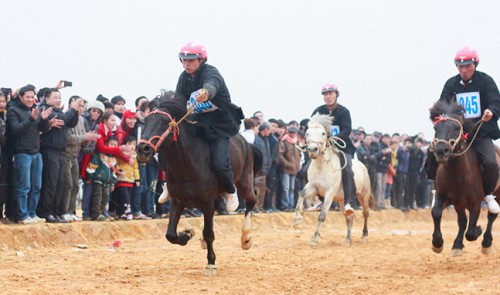 The first prize went to horse number 16, which has won the race for the past three years.

The time-honored tradition of springtime horse racing, which is practiced by the Mong ethnic minority in some northern mountainous provinces, is indicative of the Mong men’s intrepid spirit and sportsmanship, as they only wear a safety helmet and don’t use saddles.

Other springtime traditional customs and folk games such as fire hopping, husband snatching, a rain ritual, and Central Highlands gong performances were also recreated during the fest.

The event is annually put on by the Ministry of Culture, Sports, and Tourism to preserve and promote the 53 Vietnamese ethnic communities’ cultural identities.