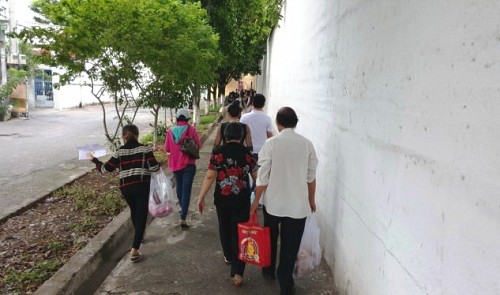 Many have found it particularly hard to visit their folks held in custody, whatever their offense, even though arrestees’ visitation rights are legally guaranteed.

Some have not seen their loved ones   for up to two years, missing them badly and leaving them painfully stressed about their kin’s legal fate and living conditions.

Elderly people also make their agonizing way to the visiting quarters, in the hope of seeing their children or grandchildren again after months of separation, only to be rejected.

Parents of law breakers, many of whom cover up to 1,000 kilometers to reach the detention centers, are generally denied visits until investigation of their relatives’ crimes are complete.

On a recent visit by Tuoi Tre (Youth) newspaper reporters, there was simply no room left on the long benches inside the custody quarter at Chi Hoa Prison, located in District 10, Ho Chi Minh City.

Nguyen Van Trung, 57, a motorbike taxi driver, was waiting to get visitation paperwork done and meet his son after four months.

He carried a hefty plastic bag of food and necessities, which cost him several working days’ income, to supplement his son’s diet.

Trung followed his son to Ho Chi Minh City eight years ago before the latter was caught snatching a person’s cellphone and arrested around four months back.

He was not allowed the visit he had been hoping for, and had no choice but to entrust prison officers with passing his gifts to his son.

Phuong, who resides in the Mekong Delta province of Vinh Long, has not seen his wife for two years, as her case is complicated and serious.

His wife is standing accused of fraud.

Pham Thi Nuong, 65, implored prison officers to allow her to visit her son before waiting for another two hours to have the paperwork for such a visit completed.

Twenty minutes later, her son stepped out and the mother and son exchanged a brief, tearful conversation that lasted 15 minutes, with an iron mesh between them.

Some institutions grant brief visits to detainees’ family members, but only after they have completed detailed and time-consuming paperwork.

One morning at the Nha Be District People’s Court, a young man raced to carry out the procedures required to meet with his younger brother, who was in custody.

By the time noon came around, he was still waiting, and finally gave up his effort and left for home.

Lawyer Diep Nang Binh, of the Ho Chi Minh City Bar Association, told us that he once saw a woman waiting impatiently with a one-month-old infant in her arms for a brief reunion with her husband for hours.

Not until much later the day was she informed that her husband was not eligible for a visit, pending his investigation.

She pleaded desperately with officers to allow her husband a peek at their newborn, but it fell on deaf ears.

According to lawyer Phan Trung Hoai, vice chair of the Vietnam Bar Federation, people in custody are legally entitled to visits from their relatives, defense attorneys or others offering counseling, with each visit not to exceed one hour.

Hoai noted, however, that the implementation of this rule has varied from place to place.

Some detention centers do allow visits, while others refuse, and only let relatives leave behind their gifts and money for detainees.