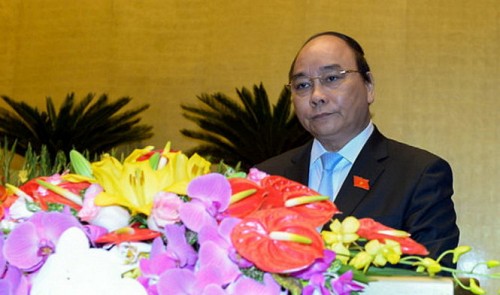 Vietnam to fill all new gov’t positions this week

The Vietnamese legislature is dedicating the entire week to filling the remaining vacancies in the new government, including the election of the new prime minister.

Vietnam’s National Assembly is electing the nation’s State President, Prime Minister and National Assembly Chairperson as well as heads of other state agencies for the 2016-20 term during its plenary meetings running from March 21 to April 12.

It has so far named a new chairperson of the National Assembly and a new head of state.

Below is the tentative election schedule for the remaining posts, from the official agenda released by the lawmaking National Assembly and other sources close to the matter.

On Wednesday, lawmakers are scheduled to vote to dismiss Prime Minister Nguyen Tan Dung from his post, with deputy premier Nguyen Xuan Phu nominated as his successor.

On Thursday, the legislative body will select the new prime minister. The newly elected premier will swear the oath of office.

The house will then vote to dismiss some deputy prime ministers, ministers and other government members.

Outgoing Prime Minister Dung revealed at a regular government meeting on March 26 that he and 19 other members of his administration will end their term in charge.

Of these, Deputy Prime Minister Hoang Trung Hai has been assigned secretary of Hanoi’s Party Committee, while another deputy premier, Vu Van Ninh, was not re-elected as member of the Party Central Committee.

Four ministers of Prime Minister Dung’s government have been appointed to new positions.

They are Minister of Public Security Tran Dai Quang, who was announced as State President on Saturday; Minister of Transport Dinh La Thang, who is now secretary of the Party Committee of Ho Chi Minh City; Minister-Chairman of the Government Office Nguyen Van Nen, who is chief of the Party Central Committee's Office; and Governor of the State Bank of Vietnam Nguyen Van Binh, who is a Politburo member.

The remaining 13 ministers are those who have reached retirement age, or who were not re-elected as members of the Party Central Committee.

They are heads of the ministries of defense; home affairs; justice; planning and investment; industry and trade; natural resources and environment; information and communications; labor, war invalids and social affairs; culture, sports and tourism; science and technology; education and training; the Government General Inspector; and Chairman of the Government's Committee for Ethnic Affairs.

On Saturday, the National Assembly will vote to fill the vacancies left by the soon to-be-removed positions above.

The new positions to be elected include three new deputy prime ministers and 19 new heads of ministries. There are already nominees for 13 out of the 19 posts.

The current Vietnamese government consists of 27 members, including a prime minister, five deputies, 19 heads of ministries, a state bank governor, and an inspector-general.