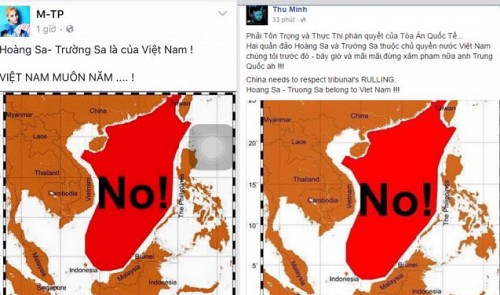 After the Permanent Court of Arbitration (PCA) announced China has no rightful claim to the East Vietnam Sea with an absurd nine-dash line on Tuesday, Vietnamese celebrities began speaking out against Chinese infringement on their country’s maritime sovereignty.

Vietnamese showbiz stars began voicing disgust on social media with China’s illicit claims to the waterway on Wednesday, after a ruling in The Hague proved their neighbor to the north was guilty of impeding on their country’s sovereignty.

Pham Huong, crowned Miss Universe Vietnam in October 2015, took to social media to say that, “Hoang Sa (Paracels) – Truong Sa (Spratlys) belong to Vietnam,” showcasing her agreement with PCA’s rejection of China’s claim of historic rights to resources within much of the East Vietnam Sea.

“China should respect the Permanent Court of Arbitration,” the Vietnamese belle opined.

Model Lan Khue, who showed a full map of Vietnam, complete with Hoang Sa and Truong Sa, during the Miss World 2015 pageant in China, reintroduced the map to her social network account, implying the U-shaped line has no legal basis.

Thu Minh, a local singer with over two million followers, said that the two archipelagos “are of Vietnam ever after.”

The Permanent Court of Arbitration in The Hague announced its ruling on Tuesday that there was no legal basis for China to claim historic rights to resources within much of the East Vietnam Sea – a subject that has long been the basis of territorial disputes by several countries.

China, which boycotted the hearings at the court, vowed again to ignore the ruling and said its armed forces would defend its sovereignty and maritime interests.