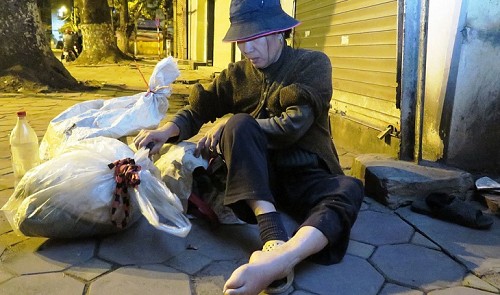 Homeless elders toil through nights for a living in Hanoi

Many elderly people have been living without a home on the streets of Hanoi, struggling to survive each day and not knowing how they will welcome the Lunar New Year under such harsh circumstances.

If one wanders along the streets of the Vietnamese capital under brisk and wet conditions at night, they can potentially run into one of these underprivileged elders.

Why do people at such an old age still have to put up with the misery? Some of them said they were left by their spouses or kicked out of their own house by ungrateful children.

Others said that they suffer a terminal disease or have lost everything to a failed business.

While most residents are soundly asleep in the comfort of their home, these elderly people have to do all sorts of jobs to earn themselves some meager income.

Sitting under a nacre tree along a sidewalk at 3:00 am, Nguyen Van Hung, 70, slowly pulled up a thin scarf to cover his torso while holding an old tire pump, fixing his eyes to the corner of the street as he was waiting for a customer in the cold evening.

Hung had earned only VND13,000 (US$0.57) that night from pumping the tires of two bicycles and two motorcycles.

Meanwhile, his wife, 65-year-old Thu, was still collecting rubbish and scrap elsewhere, having not returned to his tire pumping shop.

The ‘shop’ is located on the corner of Nguyen Dinh Chieu Street, comprising only a bicycle and a pump, which is open at night and closed during the day for house owners along the road to run their businesses.

When the sun rises, Hung takes a quick rest somewhere near the Hanoi Railway Station.

According to the elderly man, he met his wife back in their hometown in the northern province of Bac Ninh before the couple decided to earn their living in the capital.

Hung works every night to provide for themselves as well as affording medications for his wife’s breast cancer.

Located a few blocks away is the shelter Dao Rach Thoa, a 52-year-old woman, often takes.

Thoa was a member of a happy family like others before everything started to fall apart.

“My husband turned out to be a bad man while our son was not properly raised. I ended up living as a homeless person,” the woman said as she choked back her tears.

Lightning struck twice as Thoa was caught in a road accident a few years ago, right ahead of the Lunar New Year, paralyzing her left leg.

Thoa now cycles along the streets of Hanoi every night to collect trash and scrap metal for reselling for some cash.

“I cannot earn much as my body is too weak. Other collectors sometimes share some of their scrap to help me get through the rough days,” the woman said.

At a corner on Le Duan Street, Nguyen Thi Man, 78, and Dinh Thi Nga, 77, have been helping each other like two biological sisters for some decades.

Each of the elderly women can make about VND15,000 ($0.66) a day from collecting and classifying plastic bags.

The pair sometimes helps Van, an 80-year-old woman, who still has to work as a drinks vendor on Nguyen Thai Hoc Street to take care of her ill son.

Van previously had her own house before having to move into a rented room as her husband had to sell everything over a botched business.

Despite old age, the senior still has to work daily to afford medicines for her son, who is now over 40.

“What do you wish for the Lunar New Year?” Tuoi Tre (Youth) newspaper reporters asked the senior citizens.

What they need for the traditional holiday is some sugar to add to their cups of tea, a new pair of slippers and a warm scarf to welcome the Lunar New Year.

“I want a can of Hanoi beer and a can of soda to enjoy on New Year’s Eve,” Hung added with a humorous tone.

The man stated he had always wanted to return to his hometown in Bac Ninh for the holiday, which is impossible as he must stay in Hanoi to work and take care of his wife.

“I sometimes have a dream, in which I was having a meal and drinking rice wine with my family during Tet,” he said, using the Vietnamese word for the holiday.

Meanwhile, Nga hoped she could prepare some traditional dishes, especially ‘banh chung,’ or rice cake, and a branch of cherry blossoms during the holiday.