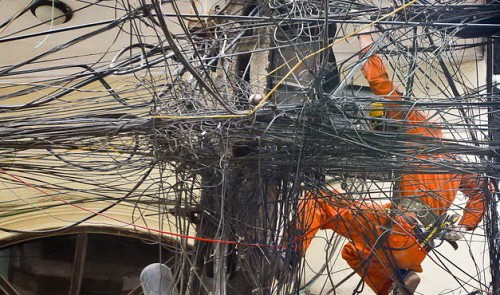 Saigon’s electrical ‘spider webs’ to become thing of the past

Ho Chi Minh City puts as much as 400 kilometers of electrical wiring underground every year, with the goal of clearing the downtown area of its infamous wire ‘spider webs’ by 2020.

By 2020, the entire electrical and telecom wire network of District 1 and District 3 will be underground, while in other districts the aim is to complete between 50 and 80 percent.

Chaotically intertwined electrical wires and telecom cables, locally referred to as ‘spider webs’, have been a characteristic of Ho Chi Minh City for years, providing a sight that awes and terrifies visitors in equal measure.

Since 2015, an ambitious project has been implemented by the city’s administration to get rid of these ‘spider webs’, with the citywide subterranean installment of electrical and telecom wires.

The plan, carried out by state-owned power supply firm Ho Chi Minh City Power Corporation (EVNHCMC) in cooperation with major telecom companies including Viettel, VNPT, SCTV and others, looks to install about 1,800 kilometers of the city’s wires and 2,000 kilometers of cable underground by 2020.

Less than three years out from the project’s deadline, many streets and alleys in Ho Chi Minh City have already been freed from the eyesore.

Hoang Oanh, a store owner on Vo Thi Sau Street in District 3, said that the bundle of telecom cables that used to exist in front of her store would sag under their own weight, obstructing the view and leaving locals living in fear of their collapse at any time.

Now that the cables had been cleared, Oanh said that the atmosphere in her neighborhood felt much less claustrophobic.

Hoang Thuong, a resident on Nguyen Dinh Chieu Street in District 3, said he had long been an admirer of the streets in District 7 and District 2, where there were no ‘spider webs’ compared to downtown areas.

“Many areas of the city center remain haunted by these spider webs, making the public space feel cramped and stuffy,” Thuong said. “I hope they will put the electrical wires underground in other streets too.”

According to Nguyen Van Hieu, an official at Saigon Power Company (SPC), a member of EVNHCMC, the electrical wire and telecom cable lines on Vo Thi Sau, Nguyen Dinh Chieu and Dien Bien Phu in District 3 are expected to be fully transferred underground by June.

SPC’s deputy director Tran Van Toan said the company had already put power grids underground in over 40 streets in District 1 and District 3 since the beginning of the project.

The total cost is estimated to be approximately VND4.300 trillion (US$191.3 million).

As of today, over 60 percent of the goal has been met, Bao stated.

The project has not been going without criticism however, with locals voicing their concerns about the safety and esthetic of electrical enclosures that have sprung up on streets where electrical wires have been put underground.

The enclosures carry warning labels that read “Do not approach; deadly electric current," prompting locals to question whether placing such ‘dangerous’ objects near their homes is a good idea, not to mention the fact that they also block the pavement.

According to Pham Quoc Bao, these electrical enclosures serve to connect the underground power grid to households on the surface and are therefore an essential part of the network.

As the electrical enclosures are designed to improve safety, in the future the warning labels may be replaced with posters encouraging households to use electricity sparingly, Bao said.

According to Tran Van Toan, aside from major streets, the subterranean installment of the power grid in Ho Chi Minh City will also be extended to the city’s back alleys.

Eight alleys will benefit from the change in 2017, he said, while another 29 alleys in downtown areas are expected be free from visible electrical wires in 2018.