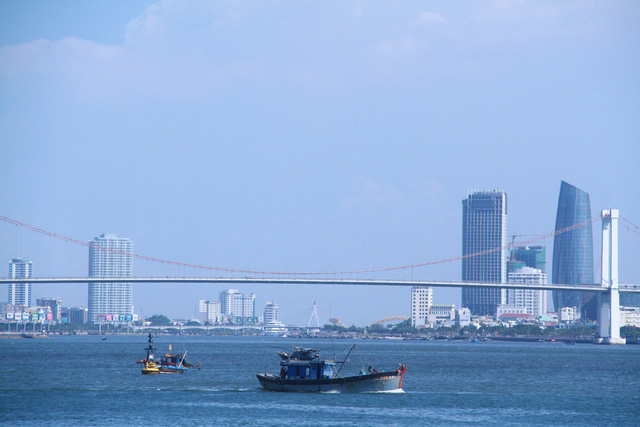 I first came to Vietnam in 1993, falling instantly in love with the atmosphere – it was like going through a time machine back several decades or more.

Impressive colonial buildings, more bicycles than motorbikes and cars combined, delicious local food with a dab of French influence, iced coffee so strong it raises the hairs on your arm, and a lilting tango wafting through the warm breeze.

The largest denomination of Vietnamese dong notes was 2,000 (worth about 20 cents in U.S. currency at that time), so a good-sized stack was needed for any meaningful transaction. The usual system was to put 4 such bills together, then wrap a 5th note perpendicular to the other 4, and finally fold all 5 in half into a neat little package which totalled VND10,000.

Put an elastic band around 10 of those little bundles and you had VND100,000 ready to go – about US$10 – more than enough for a fun day’s worth of expenses.

I carried a shoulder bag full of cash because there were no international ATMs at the time, nor hardly any local cash machines for that matter.

The scene was ccompletely raw and authentic – very few foreign tourists – some Russians living and working mostly in Vung Tau, plus a smattering of French, mainly in Ho Chi Minh City.

The food was out of this world – of course I headed right away for the street food, skipping the fancy places just opened by the recently-arrived French culinary wizards who were busy re-discovering their former colony.

I enjoyed it all but developed the irritating habit of walking bent over to the point where finally I could hardly move, then relented and found a doctor. Language was not a barrier because most locals, middle-aged and older, spoke French, including the doctor, who fixed my stomach and had me walking upright again in a jiffy. Voila Monsieur!

Regrettably, I had already set up shop in Thailand with a business so I could only spend a few weeks in Vietnam that first time. But the country never left me – there was a sentiment of unfinished business, and I finally returned although it took over 20 years to make my way.

It’s odd how fate sends us what we need – we just have to make sure we jump on the right train at the right time when it goes by.

Since returning to Southeast Asia full-time early 2013, I’ve spent about a year in the Philippines, then left for Jakarta, left Jakarta for Bali for another year, moved on from Bali too, adding and later removing Cambodia to my list for a couple of years. Malaysian Borneo has always remained on the list, but faded in priority over the past couple of years.

Finally I made my way back to Da Nang for the start of a new adventure in Vietnam over two years ago.

Even after over 20 years Vietnam felt unchanged, this global world hasn’t taken it over yet. Sure, there are tall and fancy buildings now, wide boulevards and highways, bridges and motorbikes coming out of your ears, but the vibe is still yesteryear, halfway in the present and half in the past.

We see less “ao dai” traditional dresses now, the fancy foreign air-conditioned cafes abound, there are dozens of channels on TV, and almost every business has free Wi-Fi, so some tools and amenities have changed the landscape.

We still hear those broken-heart/homesick melodies while strolling around and crouching on low stools for a street meal or a coffee. The food is prepared meticulously by hand, half the baguettes we touch are still warm from the oven, and there are just as many “non la” conical hats as before.

Why change it all?

There seems no need, or maybe I “can’t see the forest for all the trees” being too deep into the scene?

Void of the “progress” we see in many developing countries, a lot has not changed one iota in Vietnam – cultures, customs, and traditions still rule.

Da Nang, as many of us have discovered in recent years, is as pretty as a postcard, provincial in look and feel with friendly locals and a slower pace than the capital, Hanoi, and Ho Chi Minh City. Most of the businesses are family-owned, passed down through the generations. There are very few Westerners in the city center area bordering the Han River, adding to that local authenticity.

The Westerners are mainly located in the neighbourhoods around My Khe and in gorgeous neighbouring Hoi An, a highly touristy ancient international trading port.

So for the most part I have the center of Da Nang to myself, or so it feels.

And the locals didn’t waste any time at all rolling out the welcome mat. It seems like I’ve met nearly everyone in the city center during the 1.5 years in Da Nang, and if I didn’t, they went out of their way to meet me.

Most can’t say anything at all in English, or very little, but that didn’t hinder us for a moment because it’s such a friendly place, especially for a city of well over one million. Every time I go to my favourite breakfast soup place it was like walking into my mom’s kitchen – the women clucking and fussing as they made the best dishes each time.

One of the great thrills about the nomadic lifestyle is instead of never feeling at home, I always feel at home wherever I go. I know the best of the best of central Da Nang, only occasionally visit the beach areas, and made some great friends along the way.

I also had Da Lat on my list for many years and finally made it there just over a year ago. If Vietnam in general feels like a trip back through the decades, Da Lat feels like reversing through a few centuries!

I always say if you replaced all the signs in Vietnamese with French, you’d be in Europe, that’s how authentically European Da Lat is.

Even more ironic is that Da Lat is built on a series of hills, reminiscent of a medieval-style European city. I lived in such a city for 10 years in Switzerland so coming to Da Lat was very much like a homecoming.

Stone stairs wind their way up the hill in Da Lat

Da Lat has a more provincial feel to it than Da Nang, with a strong nucleus of locals and much less migration from large urban centers. The city is hard to reach by road from Ho Chi Minh City and the coast that lies to the east, so it’s more of a special getaway destination for Vietnamese who want cool weather and some open space.

It’s odd that my other favourite nomadic haunts in Southeast Asia are slowly dropping off my list, leaving me blissfully in Vietnam, off the beaten path, away from the hustle and bustle and endless “improvements.”

At any point in time it’s the dry season somewhere in Vietnam – that’s the advantage of having a country that stretches over 1,600 kilometers from north to south.

I can stand a little rain, but as luck would have it the seasons in my two favourite spots complement each other nicely, so one of the two is always dry.

After leading a nomadic lifestyle for so many years I understand now how difficult it is to find a place that grabs your heart and won’t let go, while the others fade away.

They say lightning never hits the exact same place twice, but I’m lucky and grateful that it has for me in Da Nang and Da Lat.