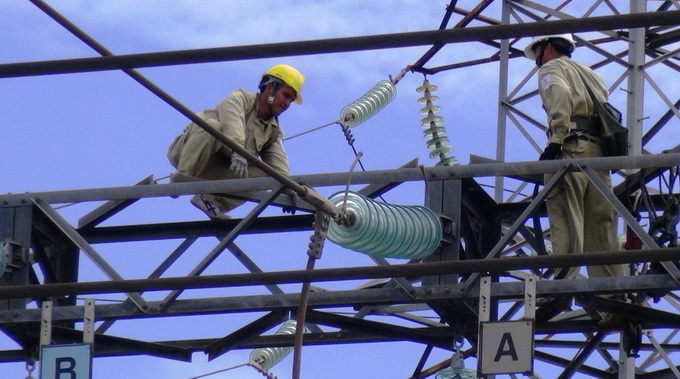 Vietnam to reduce power imports from China in 2015: official

Vietnam will import less electricity from China next year, as many new power projects are slated to be commissioned in the next several months, an official from a Vietnam Electricity (EVN) unit has said.

Many power projects in northern Vietnam will be put into operation in the last months of this year and early next year, ensuring abundant electricity supply for the region, Ngo Son Hai, director of the National Load Dispatch Centre, told Bao Dau Tu (Investment Newspaper) newswire on Monday.

“Imports of electricity from China will thus continue to drop,” Hai said.

The national grid in the north will be linked with supply from many coal-fired thermal power plants such as Quang Ninh 2, Hai Phong 2, Nghi Son 1, Vung Ang 1, and Mong Duong 2, Hai told the newswire.

The total backup power supply for the north during the dry season, normally from December to April the following year, is around 3.6 billion kWh, according to the official.

“The reduced imports of Chinese electricity is good news to people interested in the power sector, even though the power supply from China is cheaper than those generated domestically,” Hai said.

The import price of electricity from China is VND3,800 cheaper per kWh than electricity generated by the diesel-fueled power plants in Vietnam, Hai elaborated.

Electricity purchased from China is joining the national power grid to serve 13 northern Vietnamese localities, according to Hai.

“Electricity imports from China in the third quarter of this year did not exceed 1.5 percent of total domestic consumption,” Hai said, adding that there were days when not a single kWh of Chinese-originated electricity was used.