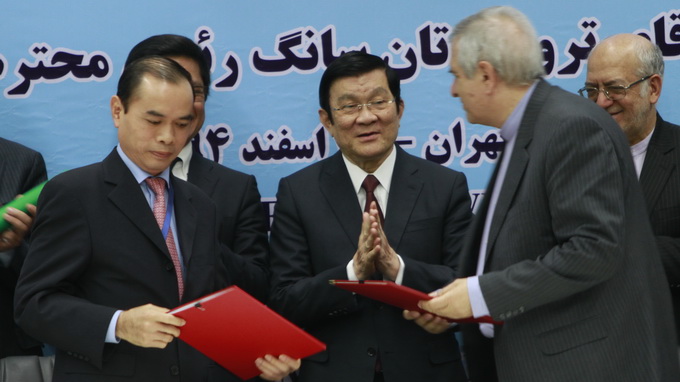 Following the Vietnamese president’s first state visit to Iran since sanctions were lifted in January, the State Bank of Vietnam and Iran’s Central Bank signed a memorandum of understanding on Tuesday, with the two countries targeting billions of U.S. dollars in trade over the next few years.

The signing of the memorandum was presided over by State President Truong Tan Sang and took place at a bilateral business forum in Tehran on March 15.

Speaking at the forum, Iran’s Minister of Industries and Business Mohammad Reza Nematzadeh said Vietnam-Iran bilateral trade turnover is expected to grow to US$2 billion in five years in view of the recent abolition of trade embargoes on the Persian Gulf country.

“We will work closely with the representative bodies and authorities of the two countries to observe, study, and offer solutions and incentives to encourage cooperation among businesses, as well as increasing trade promotion activities,” Nematzadeh promised.

Addressing business representatives at the event, President Sang underlined that for the time being, the two nations should focus on finding solutions to existing financial and banking issues, especially in the payment process, to assist businesses in forming trade partnerships.

Speaking with Tuoi Tre (Youth) newspaper, Deputy Governor of the State Bank of Vietnam Nguyen Dong Tien asserted that the memorandum served as the basis for enhanced exchange of information, training of officials, and discussions on methods of interbank payment to support economic, investment, and commercial relations between the two nations.

“Vietnam has joined the global transaction network, and Iran will do the same after the removal of embargoes on the country, which I believe will lay the foundation for future cooperation. We will encourage domestic commercial banks of Vietnam to invest in the Iranian market,” Tien said.

On the same day, the Vietnamese president also received Kamal Sajjadi, president of the Iran-Vietnam Friendship Association. The two expressed mutual contentment in recent progressions of bilateral relations between the countries, especially on political terms.

Sajjadi reaffirmed the association’s willingness to actively coordinate with Vietnam in organizing cultural, academic, and educational exchange events to improve mutual understandings between the two peoples.

The association will also study and propose initiatives for businesses to overcome difficulties in commercial and banking transactions, Sajjadi promised.

President Sang arrived in Tehran on March 13 for an official state visit lasting three days, at the invitation of his Iranian counterpart.

In his working agenda, the Vietnamese president also met with the Speaker of Iranian Parliament Ali Larijani and the Chairman of Expediency Discernment Council Akbar Hashemi Rafsanjani.

Both Iranian officials expressed their appreciation and support for the development of Vietnam-Iran friendly relations and multifaceted cooperation, especially in the economic sector.

Speaker of Parliament Larijani urged the settlement of interbank cooperation and connection among businesses, regarding them as the requisites for comprehensive improvement in economic, commercial, and investment cooperation between the two nations.

On this occasion, the Vietnamese president also forwarded the invitation from Vietnam’s Chairman of National Assembly Nguyen Sinh Hung to Speaker Larijani to visit the Southeast Asian country in the near future, which he gladly accepted.

The UN Security Council began imposing sanctions on Iran in 2006 after the nation refused to suspend its uranium enrichment program.

The sanctions negatively affected multiple sectors of Iran’s economy, until they were lifted in January this year, following the country’s agreement to limit its nuclear programs.