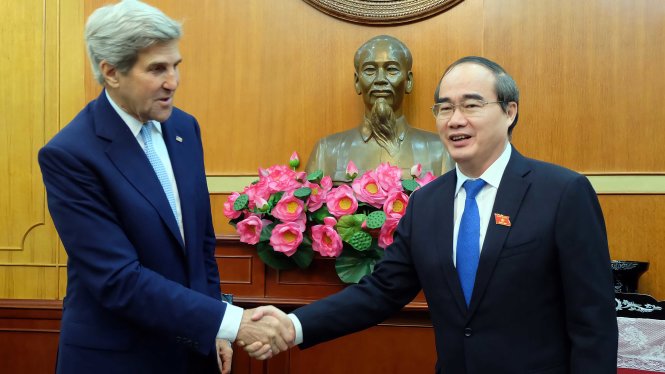 US wants to help Vietnam with renewable energy: John Kerry

The U.S. will support Vietnam in formulating a plan to switch to renewable energy from coal-fired power, former Secretary of State John Kerry told a Ho Chi Minh City leader in Hanoi on Wednesday.

Vietnam has plans to build 19 to 50 coal-fired power plants in the future, which may do more harm than good, the top diplomat under the Obama administration said at a meeting with Nguyen Thien Nhan, secretary of the southern metropolis’ Party Committee.

Kerry added he had previously held talks with Vietnamese Prime Minister Nguyen Xuan Phuc and both sides had agreed on a cooperative mechanism whereby the U.S. will prepare a feasibility study for Vietnam to turn its energy reliance to solar or wind power.

Besides energy development, Kerry told his host that he was willing to assist Ho Chi Minh City in attracting foreign investment and cooperate with local authorities to turn Vietnam’s southern economic hub into a smart city.

Nhan, the city’s top leader, reassured Kerry that the Vietnamese government is focusing on improving its investment environment, and Ho Chi Minh City, in particular, is slated to introduce enhanced mechanisms to facilitate investment on the whole.

The Vietnamese official briefed his guest on the city’s aim of becoming a financial center, and called for more assistance from the U.S. to achieve this goal.

In February, Kerry joined Yale University as a Distinguished Fellow for Global Affairs, responsible for running the Kerry Initiative, a program devoted to addressing global challenges.

Nhan congratulated the former U.S. diplomat on the new role, expressing his hope that Kerry will continue to contribute to the Vietnam-U.S. relations with his experience.