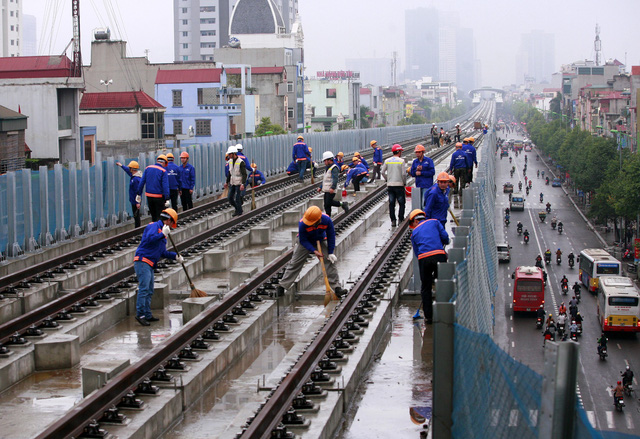 Vietnam’s Ministry of Transport has given a new deadline for the sluggish construction of the Cat Linh – Ha Dong urban railway in Hanoi, as there are no more reasons to excuse for the long delayed completion of the Chinese-funded project.

The ministry-run railway project management board should work closely with the Chinese contractor of the project to speed up the construction and put it into commercial run next year, Deputy Minister of Transport Nguyen Ngoc Dong said at a meeting in Hanoi on Friday.

“Any difficulty arising during the implementation process should be reported immediately to the ministry to avoid wasting more time,” the deputy minister said.

By the end of January 2018, the transport ministry will report to the government, which will set the official final deadline for the sluggish project, Dong added.

The Vietnamese transport ministry turned the first sod on the Cat Linh – Ha Dong urban railway on October 10, 2011, with the project then expected to begin commission by June 2015.

The project was initially expected to consume US$552.86 million, including official development assistance from China. The plan was however revised in early 2014, with completion deadline delayed to for 2015 and commission time to 2016. The total investment needed for the project was also increased to $868.04 million.

The Vietnamese government also backed a proposal to continue borrowing $250.62 million from China to cover part of the additional investment needed.

No more reasons for excuse

The railway project management board and the project’s EPC (engineering, procurement and construction) contractor, China Railway Sixth Group, have repeatedly pointed to the lack of capital and equipment to excuse for their sluggish progress.

However, Dong underlined at Friday’s meeting that there are no reasons to make such excuses, now that the Export-Import Bank of China (China Eximbank) has completed procedures to disburse the $250.6 million additional loan for the project.

The new loan agreement was signed on May 11 and came into effect on December 28, Dong said, citing information from China Eximbank.

“With the biggest obstacle that has slowed down the progress now resolved, the project will be financially able to speed up work now,” Dong said.

The deputy minister added that the construction has so far 95 percent completed, with only some stops and the technical infrastructure units unfinished.

“Other needed pieces of equipment are also being imported, so there are no reasons why you keep falling behind progress,” Dong said, referring to the project’s management board and EPC contractor.

The demanded that the Chinese contractor prepare specific working plan for every week and month, and start allocating the additional capital to its sub-contractors. The EPC contractor should also replace incapable sub-contractors to ensure progress for the project.

“We have told our Chinese partner that the Cat Linh – Ha Dong project has witnessed three different ministers of transport so they have to speed up progress,” Dong told reporters.